HHS mandate: Why the kerfuffle?

I have been very reluctant to to post anything about the current stand-off between the U.S. Catholic bishops and the Obama Administration caused by the implementation of the Department of Health and Human Services mandate, not least of which because Church teaching on the matter at stake is a subject I write about fairly regularly. I also hate to be one of the few voices to break the news to my sisters and brothers that the current dust-up is about contraception. By insisting that it is about contraception, I do not deny the fact that it is also a matter of religious liberty about which all citizens of United States should be concerned, whether they are Catholic or not, religious or not. But outside the secular realm, in the ecclesial realm, concerns about religious liberty are only of secondary importance. I have to admit that it strikes me as very odd that a rule mandating Catholic institutions, through their health insurers, offer free contraceptives to their employees is what would spark a row between the U.S. bishops and the Obama Administration.

The reason I find it odd is because the coverage that the Department of Health and Human Services is seeking to require is already provided by many of the affected Catholic institutions. Of course, there are also many Catholic institutions that, in keeping with Church teaching do not offer such coverage. This brings up the uncomfortable question about why, when we are remonstrating so vigorously against the mandate, are so many Catholic institutions given a free pass by the bishops? Is it one thing to be required to violate one's religious beliefs and another to do so voluntarily? Of course, the answer to this rhetorical question is clearly "Yes." But in terms of the Church's teaching as it applies to institutions who claim the name "Catholic" this is problematic to say the least and goes some distance towards robbing the Church of creditability on the subject in the political debate.

In light of this unfolding saga it seems clear that whether the Catholic Church in the United States wants to or not, we will be forced to discuss the matter that is the cause of such a mammoth political battle. The only way to avoid that outcome is for the bishops to accept the Obama Administration's "accommodation" (as opposed to compromise) on the matter and call it a day. The president is standing pat, as is his Catholic secretary of the Health and Human Services, Kathleen Sebelius. Their reason for doing so is because they know that when it comes to contraception most Catholics either ignore or actively dissent from the Church's teaching, this includes many clergy and not a few bishops. After all, the argument that access to contraception is a form of "preventative care," rooted in the fairly insane notion that pregnancy is a disease, that is, something to mostly be mostly avoided, has proven very persuasive. Senator Barbara Boxer of California is already making the obvious case in favor of the HHS rule, arguing that an individual's right to contraceptive coverage trumps religious liberty. She went on to warn, using the most specious slippery-slope reasoning imaginable, that repealing the rule would have even more dire consequences. 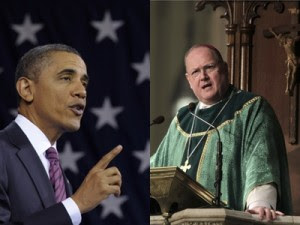 Msgr. Lorenzo Albacete in his recent article, HHS Mandate/The true rights of women and men, is right when he opines that "the conflict will be framed from now on: contraception vs women's rights." We are already at the point at which any insistence that this is "only," or even primarily, a question of religious liberty, is passed. We must have the courage to tell the truth, even when it seems clear that the truth will not be convincing to most people, including many Catholics. One Catholic commentator boldly stated that by rejecting the administration's "accommodation," the U.S. bishops were snatching defeat from the jaws of victory. But the bishops were right to insist that the proffered solution was no victory, as tempting as it must have been to put the matter the rest. Our bishops deserve credit for the courage they have shown in rejecting the "accommodation."

In his annual Christmas speech to the Roman Curia for 2008, Pope Benedict XVI said, "An integral part of the Church's proclamation must be a witness to the Creator Spirit present in nature as a whole, and, in a special way, in the human person, created in God’s image.

"From this perspective, we should go back to the Encyclical Humanae Vitae: the intention of Pope Paul VI was to defend love against sex as a consumer good, the future against the exclusive claims of the present, and human nature against its manipulation."

A friend of mine, Catherine, during a discussion prompted by posting the link to Albacete's article on Facebook today, wrote: "I'm going to suggest that a true feminist will balk at women forever being told to impair their fertility, especially as 99% of the time, it is in order to accommodate men. Sorry, no. It's not liberating if we're still making this a "woman's issue" as if men don't matter and don't have anything to do with reproduction." This strikes me as a verification of what Pope Paul VI in Humanae Vitae predicted: "Another effect [of the use of artificial contraceptives] that gives cause for alarm is that a man who grows accustomed to the use of contraceptive methods may forget the reverence due to a woman, and, disregarding her physical and emotional equilibrium, reduce her to being a mere instrument for the satisfaction of his own desires, no longer considering her as his partner whom he should surround with care and affection" (par. 17).
at February 15, 2012

Email ThisBlogThis!Share to TwitterShare to FacebookShare to Pinterest
Labels: Faith and morals, Politics