Bl. John XXIII and the plight of Italian hens

Because later this year we will mark the 50th anniversary of the opening of the Second Vatican Council, I have been doing some reading about the Council and events leading up to it. Right now I am reading a book published in 1959 by Dominican friar, Fr. Paul Perrotta, on the election of Bl. John XXIII as pope: Pope John XXIII: His Life and Character. After reading the chapters on the origins of the papacy, the history of the papacy, the pontificate of Pope Pius XII, the death of Pius XII, and the conclave that selected Angelo Giuseppe Roncalli as pope, I began the first chapter on Good Pope John, "His Antecedents and Background." It was in this chapter that I read a passage, which I found equally delightful and funny. After stating how poor the farming Roncalli family was, Perrotta wrote, 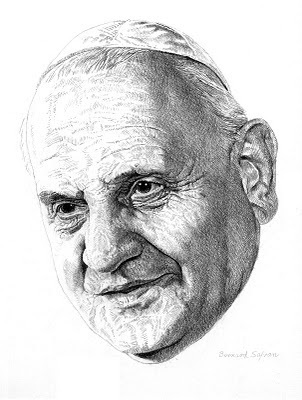 It is hard for us Americans to accept that farmers in Italy use very little milk and eggs on their table. Milk is converted into cheese because there is no refrigeration and eggs are jealously kept for the sick or for traditional cakes. They produce few eggs at best, because hens in Italy are not the spoiled darlings of farmers, bulging as they do here with purina chow, but have actually to scratch for a living 'mid the refuse of the barnyard.

I found myself wondering what the jovial Papa Roncalli, who was indeed raised in such humble circumstances, would make of such an observation, especially given that in a biography of John XXIII I read some years ago the author wrote, "he was known as a good fork," meaning he loved to eat!

Since sundown marks the beginning of the Feast of the Presentation of the Lord, formerly known as Candlemas (when candles to be used, not only for special liturgical purposes, but even at home, were blessed), below is a brief clip of Bl. John XXIII on Candlemas 1959 blessing what appear to be Paschal Candles: