Desire is desire for God

In the Christian tradition it is said of fasting, which always refers to fasting from food, that it quickly reveals what controls us, be it our belly, our anger, our pride, etc. Hence, along with revealing to us both our need for bodily sustenance and, at least in our overfed society that typically laments injustice even as our manner of life makes us, even if indirectly, complicit in it, how much less sustenance we need when compared with how much we normally take, it also shows our other weaknesses, additional areas of need. It is a truism that if we fail control appetites, whether for food, or anything else, our appetites quickly control us. If you get angry at the slightest provocation, pretty soon being provoked by anger becomes your response to anything in life you find slightly challenging, irritating, or annoying. You become angry without giving it any thought.

Appetites that are totally out of one's control are addictions. Perhaps the most difficult thing for someone in the grip of an addiction is to admit that they are an addict, which is to admit that they have no control, not only over a particular appetite, but, as a result of an out-of-control appetite, over her/his life, which is controlled by the addiction. Also, to admit an addiction is to admit that it is an appetite you need help to get under control, the realization you can't do it on your own. Something that can be very discouraging to someone who has admitted an addiction, sought help, and is making progress, is the realization that the appetite, the desire, doesn't ever go away, it diminishes, lessens for a time, only to pop up again. Desire, after all, is an existential condition that constitutes our humanity.

In his book Fasting, which I have referenced several times over the past few weeks, Scot McKnight cites the example of Carl Lundquist, a university president who did not become familiar with fasting until he was a bit older. Walking back to his hotel from a meeting he attended in Korea during which Dr. Joon Gon Kim shared his own experience with fasting so that a political decision by the South Korean government would be overturned, Lundquist realized that he "had never fasted like that." He came to the further realization that the reason he had never fasted like that was likely because he "had never desired a work of God with the same intensity." McKnight uses Lundquist's experience to further his point "that it is the desire, the yearning, the 'want-it-ness' that gives rise to the kind of fasting that benefits the one [who fasts]." All of this is merely to pose the question, What do you want, I mean, really desire, both for yourself and others?

In a lovely book of blessings, To Bless the Space Between Us, the late John O'Donohue composed a blessing "For An Addict," that recognizes the desire: 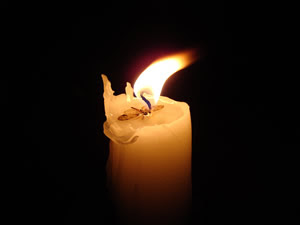 On its way through the innocent night,
The moth is ambushed by the light,
Becomes glued to a window
Where a candle burns; its whole self,
Its dreams of flight and all desire
Trapped in one glazed gaze,
Now nothing else can satisfy
But the deadly beauty of flame...

May some glimmer
Of outside light reach your eyes
To help your recognize how
You have fallen for a vampire...

That your lost and lonesome heart
Might learn to cry out
For the true intimacy
Of love that waits
To take you home."

I don't think you have to be addict to receive this blessing, which is one that God, who because of Jesus we can call "our Father," wants to bestow on each one of us. Nonetheless, God, precisely because He is love, always respects our freedom, that is, not only waits, but longs for us to recognize our need and to begin to fulfill our desire.
at February 25, 2012

Email ThisBlogThis!Share to TwitterShare to FacebookShare to Pinterest
Labels: Reflections and Ruminations, Spirituality