Sts. Cyril & Methodius, more than an inside joke

There are so many things to write about, but so few that are really of interest to me at present. I have to be honest, not having access to a computer last week and so not posting for several days helped me to accomplish something I was trying to do as the new year began, which was not to put pressure on myself to post something everyday, to prudently keep certain observations to myself, and to post only when I had the inclination. So, I am grateful for that, especially since Lent is just around the corner.

It somehow seems fitting that Valentine's Day this year falls a week from Shrove Tuesday (i.e., the day before Ash Wednesday, in some cultures called "Fat Tuesday"). Next year Valentine's Day will be the day after Ash Wednesday. Were it not for the leap year this year we would witness something truly cataclysmic; the extraordinarily secular(ized) Valentine's Day falling on Ash Wednesday! I would be lying if I wrote that I am glad or relieved I don't get witness this spectacular collision of the sacred and profane.

So, on this Valentine's Day, here's to the great brothers Saints Cyril and Methodius, natives of the ancient city of Thessoloniki, where the Apostle Paul himself established the Christian Church, apostles to the Slavs, my wife's people. Since the reform of the Roman liturgical calendar after the Second Vatican Council, today has been the liturgical memorial of these two, falling on what the Roman Church believes to be the day of the death of St. Cyril. Today's memorial is an obligatory memorial, meaning that in the Church's liturgy it cannot be disregarded in favor of the Sixth Tuesday of Ordinary Time.

In 1985, Bl. Pope John Paul II, himself a Slave, promulgated what is perhaps his least known encyclical letter, Slavorum apostoli, concerning these two great saint. In his Apostolic Letter of 31 December 1980, Egregiae virtutis (there is no official English translation), along St. Benedict, who was proclaimed the Patron Saint of Europe in 1964 by Pope Paul VI, he made Saints Cyril and Methodius Co-Patron of Europe. Below is a brief, but important, section from the encyclical, that helps see that the saints we memorialize today are more than an inside joke among Catholics who seek to order their lives around the sacred calendar of the liturgical year. Additionally, what he Bl. Pope John Paul wrote about the relationship between faith and culture transcended the subject of his encyclical: 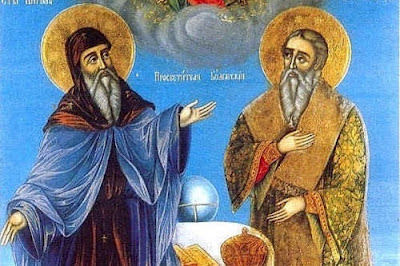 
VI. THE GOSPEL AND CULTURE

21. The Brothers from Salonika were not only heirs of the faith but also heirs of the culture of Ancient Greece, continued by Byzantium. Everyone knows how important this heritage is for the whole of European culture and, directly or indirectly, for the culture of the entire world. The work of evangelization which they carried out as pioneers in territory inhabited by Slav peoples-contains both a model of what today is called " inculturation the incarnation of the Gospel in native cultures and also the introduction of these cultures into the life of the Church.

By incarnating the Gospel in the native culture of the peoples which they were evangelizing, Saints Cyril and Methodius were especially meritorious for the formation and development of that same culture, or rather of many cultures. Indeed all the cultures of the Slav nations owe their "beginning" or development to the work of the Brothers from Salonika. For by their original and ingenious creation of an alphabet for the Slavonic language the Brothers made a fundamental contribution to the culture and literature of all the Slav nations.

Furthermore, the translation of the sacred books, carried out by Cyril and Methodius together with their pupils, conferred a capacity and cultural dignity upon the Old Slavonic liturgical language, which became for many hundreds of years not only the ecclesiastical but also the official and literary language, and even the common language of the more educated classes of the greater part of the Slav nations, and in particular of all the Slavs of the Eastern Rite. It was also used in the Church of the Holy Cross in Cracow, where the Slav Benedictines had established themselves. Here were published the first liturgical books printed in this language. Up to the present day this is the language used in the Byzantine liturgy of the Slavonic Eastern Churches of the Rite of Constantinople, both Catholic and Orthodox, in Eastern and South Eastern Europe, as well as in various countries of Western Europe. It is also used in the Roman liturgy of the Catholics of Croatia.

22. In the historical development of the Slavs of Eastern Rite, this language played a role equal to that of the Latin language in the West. It also lasted longer than Latin in part until the nineteenth century-and exercised a much more direct influence on the formation of the local literary languages, thanks to its close kinship with them. These merits vis-a-vis the culture of all the Slav peoples and nations make the work of evangelization carried out by Saints Cyril and Methodius in a certain sense constantly present in the history and in the life of these peoples and nations.