Libertas ecclesiae: freedom for the truth

Reading Bl. Pope John's radio address of 11 September 1962, I came across something that is very germane to the current contraception kerfuffle. Well, in reality two things. First, he said that the Second Vatican Council would "present, in clear language, solutions which are demanded by the dignity of man and of his vocation as a Christian." Among these solutions was "the strenuous defense of the sacred character of matrimony (which imposes upon the married couple an understanding of generous love, from which results the procreation of children), considered in its religious and moral aspect within the framework of the gravest responsibilities of a social nature, in time for eternity" (italicized and emboldened emphasis mine).

A little later in the address, Good Pope John asked, "What is to be said concerning the relations between the Church and civil society?" To which he replied, "We are living in the midst of a new political world. One of the fundamental rights which the Church can never renounce is that of religious liberty, which is not merely freedom of worship.

"The Church vindicates and teaches this liberty, and on that account, she continues to suffer anguishing pain in many countries.

"The Church cannot renounce this liberty, because it is inseparable from the service she is bound to fulfill. This service does not stand as the corrective or the complement of what other institutions ought to do, or have appropriated to themselves, but it is an essential and irreplaceable element of the design of Providence to place man upon the path of truth and liberty which are the building stones upon which human civilization is raised" (italicized and emboldened emphasis mine).

That is why on matters like the Department Health and Human Services mandate and the attempted accommodation are never merely matters of religious liberty. Freedom is rooted in the truth both about God and man. Pope John also bore witness to the need for the Church to proclaim the truth in season and out, not compromising on what matters the most, even that doesn't sit well. By giving consistent witness to the truth we don't force ourselves to ignore the issue at stake, those things that we need to be free practice, to do or not do. Freedom can never an empty concept because freedom is not an end in itself. 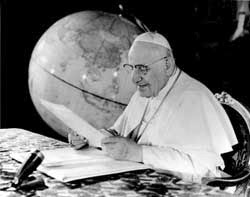 To put a little meat on the bones offered, I offer one remark by Giorgio Vittadini made in the course of a discussion that took place in Rome back in December 2004 (thanks to my dear friend Dario for correcting the date of this conversation for me) on Libertas Ecclesiae and the Lay State:

"When Catholics let go of experience, they don’t defend the libertas ecclesiae, because they no longer know what libertas or ecclesia are."

In short, we cannot become secularized and secularizing pragmatists and give consistent and compelling witness to the truth.
at February 20, 2012

Email ThisBlogThis!Share to TwitterShare to FacebookShare to Pinterest
Labels: Ecclesiology, Faith and Reason, I believe