Repetition of the miraculous

Today's Gospel reading is one of my favorite episodes in all the Gospels, the pericope of the paralytic young man who wanted to be healed by Jesus so badly that he had his friends lift him up on the roof of the house where Jesus was, open the roof, and lower him down inside. Once he was there in front of Jesus, the Lord did not rebuke for cutting in line, or otherwise chastise him. Why? Because, as we read, "Jesus saw their faith," which indicates that our Lord not only saw the faith the paralytic man, but of his friends, who went to such great lengths to place their friend in front of Him.

When Jesus saw their faith He offered the paralyzed man what he came for, healing. Jesus did this by saying, "Child your sins are forgiven." It was only in response to those who were shocked by Jesus forgiving the man's sins and to prove that He possessed the divine power to do so that He asked them why they doubted He had the power to forgive sins and asked them, "Which is easier, to say to the paralytic, 'Your sins are forgiven,' or to say, 'Rise, pick up your mat and walk?'" 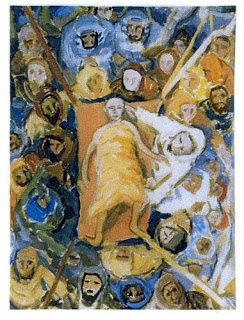 Most of us, if we were to answer honestly, would say that it is easier to say "Your sins are forgiven" because what would count as proof? On the other hand, saying to someone who cannot walk, "Rise and walk," is verifiable, either get up or they keep laying there. In reality, it is much more difficult to say, "Your sins are forgiven." It's like praying, as Jesus did during His passion, "Abba, Father, all things are possible to you. Take this cup away from me, but not what I will but what you will," or, as we pray in the Lord's Prayer, "thy will be done on earth as it is in heaven." These are easy words to say, but difficult words to mean because it is not only an attitude of trust, but of surrender to God's will as expressed by what is happening to you right now and what will happen to you down the road, down which you can't see very far.

It has always seemed to me that Jesus' attitude toward miracles was ambivalent at best. I think this was because there were many in the crowds who came to see the spectacle, the magic show. There is a way of viewing the sacraments, especially the Eucharist, in a like manner, which makes it wonderful that, in the end, we are forced to acknowledge that the only proof the bread and wine become Jesus Christ, body, blood, soul, and divinity are the transformed lives of those who partake of it. The Lord's attitude with regard to miracles is shown clearly when He says in our Gospel reading today, "But that you may know that the Son of Man has authority to forgive sins on earth" -he said to the paralytic, "I say to you, rise, pick up your mat, and go home." So, which was the greater miracle?

Because Jesus gave this same power to His Church, we must answer that the greater miracle is His absolving the sins of paralyzed man. This miracle is repeated over and over again, when in the sacrament of penance we hear, "ego te absolvo a peccatis tuis," or, "I absolve you of your sins." This is done "through the ministry of the Church" and in the name of the Father, and of the Son, and of the Holy Spirit." It is truly miraculous.
at February 19, 2012