This post is a brief follow-up to my post the other day, which was picked up and published on-line by Il Sussidiario, Libertas ecclesiae: freedom for truth. On 25 January 2012, incidentally the Feast of the Conversion of St. Paul, during a New Year's meeting traditionally held by the French president with the country's religious leaders, President Nicholas Sarkozy gave a speech that would puzzle most Americans, who are so deeply invested pragmatic liberal (not in the narrow ideological sense, but in the broader sense) secularism, said, "A secular society is one which has decided to separate churches from the state, so the state doesn’t have to account for its choices to churches, and churches don’t depend on the state to live and organize –this is secularity, a secular republic." Indeed, such a state is a secular republic as we well know. His remarks were given in response to the public support of his main challenger in this year's French presidential election, the Socialist candidate Francois Hollande, that the 1905 law of separation of Church and state be written into the French constitution.

In a relatively widely reported speech he gave at the Cathedral of St. John Lateran in December 2007, Sarkozy addressed laïcité, a French concept meaning something like a state of detente between the Church and the state, in which religions have no involvement in government affairs and are, in turn, left alone by the state, which is what the 1905 French law set forth. In his speech in Rome he said the law should be interpreted and applied "more positively" so that religion is viewed "not as a danger, but as an advantage." 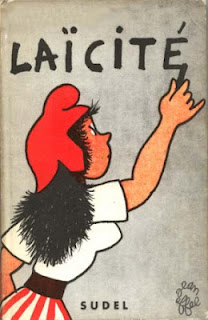 In his January 2012 speech he went on to say, "But this doesn’t mean churches, respecting the law, are forbidden from speaking. Nor does it mean your words shouldn’t go beyond the walls of your places of worship. That would be a strange idea of democracy: Everyone has a right to speak, except you."

President Sarkozy went on to insist, "No religion will impose dogmas and precepts in France on those who wish to avoid them. But nothing can prohibit the idea of transcendence from being present in our society. The concord and harmony governing relations between the different religious currents here and irrigating the social body provide an excellent guarantee of peace."

It is tempting to let this last passage go without comment, but it is important that nothing prohibits the idea of transcendence from being present in society (not that the Mystery is limited by such prohibitions, as history has shown). Only a society that not only makes room for, but that facilitates, transcendence has a chance of being a fully human society. Conversely, we must resist the distillation of religion into so many values.
at February 23, 2012

Email ThisBlogThis!Share to TwitterShare to FacebookShare to Pinterest
Labels: Faith and Reason, Politics