The surprise of Vatican II

In his lengthy apologia about what he saw as the deleterious effects of the Second Vatican Ecumenical Council on the Church, Iota Unum: A Study of Changes in the Catholic Church in the XXth Century, Romano Amerio gave an account of Vatican II that leaves little doubt that things did indeed change after the Council. In his proclamation last October of the Year of Faith, which begins 11 October 2012 and ends on the Solemnity of Christ the King in 2013, to mark the fiftieth anniversary of the beginning of the Council, Pope Benedict XVI once again insisted on a "correct hermeneutic" with which to interpret the Council. Contrary to popular belief, Pope Benedict has never called for "a hermeneutic of continuity," even as he has insisted on the inadequacy of "a hermeneutic of discontinuity and rupture" with the Church's Tradition. Rather, in his first annual speech to the Roman Curia, delivered on 22 December 2005, he called for a "hermeneutic of reform." This way of receiving and incorporating the much-needed changes called for by the fathers of Vatican II is to achieve "renewal in the continuity of the one subject-Church which the Lord has given to us. She is a subject which increases in time and develops, yet always remaining the same, the one subject of the journeying People of God." While it is certainly right to reject "a hermeneutic of discontinuity and rupture," I think this way of stating it may require more parsing: Does "discontinuity" (i.e., change) necessarily imply rupture? Before someone goes nuts about that question, what discontinuities, especially in praxis, liturgical and otherwise, can be objectively traced from the early Church councils to Trent, or between councils East and West prior to the schism, including such matter as celibacy and clerical continence, just to name two with which I am familiar, let alone the evolution of the prerogatives of the papacy?

Indeed, in Vatican II's striving both to return, at least to some extent, to the sources of Christian Tradition and to open the Church more to the world, as Von Balthasar notably and, at least at the time of its publication, notoriously, called for in his short book Razing the Bastions: On the Church in This Age, there is what we can rightly call a dialectical tension. From his careful elocution of the delicate matter of interpreting the Council without negating it, Pope Benedict grasps the tension that any honest reading, let alone interpretation and application, of the Council's documents generates. After all, as a young theological advisor to Cardinal Frings, one of the more influential participants in the Council, the relatively youthful Fr. Ratzinger played a crucial role in drafting several of the Council's most important documents. 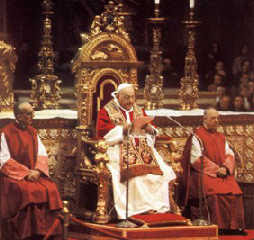 Another aspect of Vatican II Amerio confirms is its surprise, which is likely why Bl. Pope John announced his intention to call it trembling a little with emotion (emboldening and italicization added by me). Amerio noted that both Pius XI and Pius XII considered reconvening the First Vatican Ecumenical Council that was disrupted by fighting in the Italian war of unification without being formally concluded in 1870, but not before issuing the twin dogmas of papal infallibility and the pope's immediate and universal jurisdiction over the entire Church. In truth, the latter of these two dogmas is probably a bigger obstacle to Christian unity than the former. Interestingly, in his speech announcing his intention to convene an ecumenical council, Pope John made no mention of Vatican I.

It seems that Amerio is quite accurate in his assertion that Bl. Pope John XXIII conceived of the council with "no prior consultations" either with the Sacred College of Cardinals or the global episcopate. Nonetheless, in his speech announcing the Council Pope John solicited from the cardinals and bishops present as well as from throughout the world "an intimate and confident word assuring us of their attitude." He further asked for input and suggestions "on how to carry out this triple program" (i.e., diocesan synod for Rome, the ecumenical council, and a revised and updated code of canon law).
at February 03, 2012