Feast of Our Lady of Lourdes

On this date in 1858 the Blessed Virgin Mary began appearing to young Bernadette Soubirous outside the town of Lourdes in southwest France. Bernadette was 14 years-old at the time. There were seventeen more apparitions that year. The Virgin said to the young woman, "que soy era immaculada concepciou," "I am the immaculate conception." In 1862 Pope Pius IX permitted the veneration of Our Lady of Lourdes. Prior to all this, on 8 December 1854, with massive support from bishops throughout the world, with his bull Ineffabilis Deus, Pius IX, and even prior to the First Vatican Council's formal definition of the dogma of papal infallibility, defined the dogma of the Virgin Mary's immaculate conception ex cathedra:

We declare, pronounce and define that the doctrine which holds that the Blessed Virgin Mary, at the first instant of her conception, by a singular privilege and grace of the Omnipotent God, in virtue of the merits of Jesus Christ, the Saviour of mankind, was preserved immaculate from all stain of original sin, has been revealed by God, and therefore should firmly and constantly be believed by all the faithful. 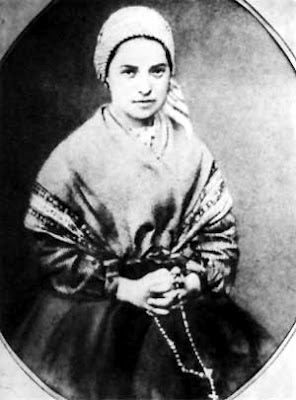 
Like the humble Virgin of Nazareth, God chose Bernadette Soubrious, a simple peasant girl from a troubled family, who had difficulty learning her catechism, to see, hear, and simply proclaim what she witnessed. On 8 December 1933 she was raised to the altar by Pope Pius XI. This proves yet again what the apostle wrote to the Corinthian church long ago, "God chose what is foolish in the world to shame the wise; God chose what is weak in the world to shame the strong; God chose what is low and despised in the world, even things that are not, to bring to nothing things that are, so that no human being might boast in the presence of God"(1 Cor. 1:27-29 ESV). Holy Mary, Mother of God, pray for us. St. Bernadette, pray for us.

Because Lourdes has become a place of so much healing 11 February is also the day the Church sets aside as World Day of the Sick. In that regard, with the recent flap about the the U.S. Department of Health and Human Services requirement dictating that Church-run institutions must provide contraceptive coverage for free (even though many, perhaps even most, already do), contraception is not "preventative care" because being pregnant is not an illness. Oh, and it is about contraception, at least on the level that matters or makes any difference. Otherwise, it seems to me that it only amounts to ripples across the surface of the water.

I would be remiss not to mention that, fittingly, today is also the birthday of my lovely wife. Today is also the twenty-ninth anniversary of the charism of Communion & Liberation being officially recognized by the Church.
at February 11, 2012