The Council and updating canon law

I read today for the very first time Bl. Pope XXIII's speech, delivered on 25 January 1959 in the Basilica of St. Paul's Outside the Walls in Rome. It was this speech that the pope announced three things of great import for the Church: "a diocesan synod for they city [of Rome], and an ecumenical council for the Universal Church," as well as an updated code of canon law (the Church's first unified code, the so-called Pio-Benedictine code, was promulgated in 1917), "which," Pope John said, "should accompany and crown these two tests of the practical application of the provisions of ecclesiastical discipline, as the Spirit of the Lord will suggest to us little by little along the way." Papa Roncalli also alluded to the promulgation of a unified code of canon law for all of the Eastern Churches in communion with the Holy See. Given that he said, "The forthcoming promulgation of the Code of Oriental Law will give a presage of these events," it seems reasonable to conclude that he envisioned the enactment of the unified Eastern code even before the synod and the council.

It is interesting to note that the updated Latin code (Codex Iuris Canonici) was not promulgated until 1983 and that the unified Eastern Code (Codex Canonum Ecclesiarum Orientalium) was not set forth until 1990. In 1983, the Latin code was promulgated by Bl. Pope John Paul II on the twenty-fourth anniversary of John XXIII's speech.

Since 1983 the Latin code has been updated several times by papal fiat. With regard to permanent deacons the most recent change, set forth by Pope Benedict XVI on 26 October 2009 in a motu proprio, Omnium in mentem, along with amending some canons regarding marriage, Canons 1008 and 1009 were also amended.

Canon 1008 was reconstituted to read: "By divine institution, some of the Christian faithful are marked with an indelible character and constituted as sacred ministers by the sacrament of holy orders. They are thus consecrated and deputed so that, each according to his own grade, they may serve the People of God by a new and specific title. 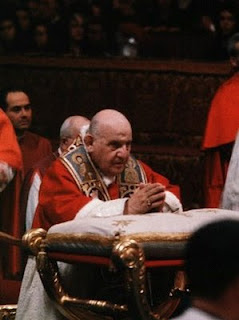 More significantly, a third paragraph was added to Canon 1009: "Those who are constituted in the order of the episcopate or the presbyterate receive the mission and capacity to act in the person of Christ the Head, whereas deacons are empowered to serve the People of God in the ministries of the liturgy, the word and charity."

In my recently completed Integrated Pastoral Research paper (i.e., thesis), relying on the more scholarly work of Dr. Bill Ditewig (who also recently posted on his blog concerning Bl. Pope John's amazing announcement, Marking a Wonderful Milestone), I noted something with regards to how even the current, updated, code deals with permanent deacons:


"Setting theological concerns about this legislation aside, Omnium in mentem is an effort to critically examine the language used to describe the diaconate over against the presbyterate. As Ditewig noted in his doctoral dissertation, The Exercise of Governance by Deacons, published in 2003, citing canonist James H. Provost, care must be taken not to use sacerdotal language rightly applied only the episcopate and presbyterate to deacons (4). However, like most efforts in this regard, Pope Benedict’s motu proprio applies to deacons negatively, merely stating what deacons are not. Provost states that because "the diaconate is an ordained ministry in its own right," although permanent deacons are a new reality in the church, "language unique to the order, and legal expressions flowing from that language, must continue to develop" (Ditewig, Exercise of Governance 4).