"and he drove out many demons"

"When it was evening, after sunset, they brought to him all who were ill or possessed by demons. The whole town was gathered at the door. He cured many who were sick with various diseases, and he drove out many demons, not permitting them to speak because they knew him" (Mark 1:32-34).

I was tempted to post something more existential on our first reading from the Book of Job this morning, but then a dear friend sent me a copy of Fr. Rutler's weekly missive to his parish, Our Savior in New York City. When people today speak of "being pastoral" they typically refer to a manner of relating to people in which "the pastor" seeks always to comfort but never to challenge, or provoke, often even at the expense of the truth, telling people what they want to hear as opposed to what they sometimes need to hear for the good of their souls (there is no higher good). I think Fr. Rutler is most pastoral in his letter and in his entire ministry as a priest. 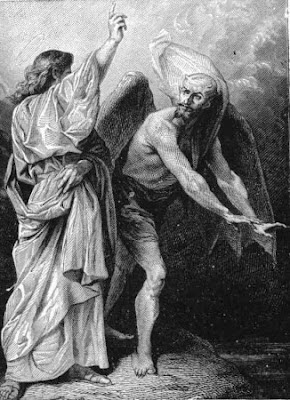 He begins his column by writing that "God so loved the world that he spared us the indignity of making us feel good about ourselves." He then cites Sacred Scripture: "The reason the Son of God appeared was to destroy the works of the devil" (1 John 3:8). From there he proceeds to say what today we are often so hesitant to acknowledge, that the devil is a real, personal being, angry that he is not God and so is hell-bent on our destruction. In our Gospel last week, as Jesus taught in the synagogue of Capernaum, an evil spirit shouts out, "What have you to do with us, Jesus of Nazareth? Have you come to destroy us? I know who you are—the Holy One of God" (Mark 1:24)! In today's Gospel, after the previous outburst, Jesus does not allow the demons to speak because they would also proclaim His identity. Referring to the outburst in the synagogue of ancient Gailiee and after noting that "Satan hides behind the plural," pretending "to be more than he is," Fr. Rutler notes that "in the presence of the Truth, even Satan cannot lie. He drops the plural and confesses what no mortal yet knew."

"Satan never looks like Satan," writes Fr. Rutler. Rather, "He drapes himself in celebrity and humor and humanitarianism, using celebrity to mislead, humor to mock, and humanitarianism to de-humanize." Examples of de-humanizing humanitarianism abound, the recent Health and Human Service rule mandating that Catholics violate their consciences by paying for contraceptives, which, in of themselves, as Pope Paul VI prophetically warned more than forty years ago, contribute to the de-humanization of what God designed to be the most human of acts. Another example is the idea that the spread of HIV in poor parts of the world, namely sub-Saharan Africa, be fought exclusively or mostly by the distribution of condoms, the reasoning being that such people cannot control themselves and so we have to control them for their own good.

While it is predictably a field ripe for fraud and abuse, meaning it requires great discernment, we still need to be concerned with spiritual warfare, which is why I frequently recommend C.S. Lewis' Screwtape Letters. You can read Fr. Rutler's entire missive on his parish website. I encourage you to do so.
at February 05, 2012