At the very end of Is It Possible to Live This Way?: An Unusual Approach to Christian Existence, vol. 1- Faith, Giussani says something that strikes me when I read it. Because it's true it is challenging. It is about human relationships and how these relationships become friendships:

"The problem of the indissolubility of marriage is the great sign of any human companionship: it can't last" (pg. 158). These words may seem surprising, but they should not be because all Giussani is doing is calling out our sentimentalism, our avoidance of reality by refusing to say, not what he "should" say (he is saying what he should say), what we want to hear, which are exalted words about marriage. Marriage, which he is using as a paradigm of human relationships, is difficult and it is no great secret that many marriages, including those of people married in the church, fail. 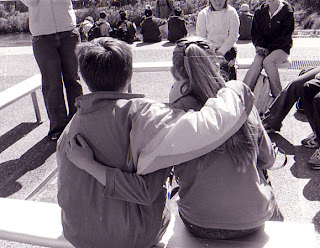 He moves next to something we might label the law of entropy as it applies to human relationships: Very often, if a marriage lasts, he continues, "it's due to interest in political or economic power, because satisfaction as such is so flimsy that it immediately decays" (ibid). This is not true of real satisfaction, that which corresponds to your heart, but the satisfaction that is sought by what attracts us and what we go after without considering it in the light of reason, in the light of reality, but sentimentally, ignoring reality. In other words, we miss the mark by investing our happiness completely in the other person, who, being a human being, will not ultimately satisfy us. This dynamic is demonstrated by couples who go off on their own and try to build a world that consists of only them. This is an unhealthy attachment. This satisfaction does not begin to decay until we possess the one we in whom we mistakenly believe our destiny lies.

It is God who seeks to attract us through other people. It is only by recognizing this that we can form genuine friendships. Hence, "[t]he more the presence of the other [person] awakens the passion for his or her destiny in you; that is, it truly becomes love. Friendship, which is mutual love, is the law of obedience" (ibid).

We adhere to friends, we stick to them. A friend is not extraneous to life, but necessary. Together we follow the One who placed us in each other's lives.
at July 27, 2010

Email ThisBlogThis!Share to TwitterShare to FacebookShare to Pinterest
Labels: Communion and Liberation