"Mary has chosen the better part"

I had forgotten how truly rich the readings for this long period of Ordinary Time in Year C are. Today, in addition to the story of Mary and Martha from Luke's Gospel, we read from Genesis about Abraham's three guests. It is common wisdom that a picture is worth a thousand words (Wittgenstein's distinction between saying and showing). So, Rublev's Trinity icon seems an appropriate starting point for a consideration of today's readings, the first of which, from Genesis, begins: "The LORD appeared to Abraham by the terebinth of Mamre, as he sat in the entrance of his tent, while the day was growing hot. Looking up, Abraham saw three men standing nearby" (18:1-2a). 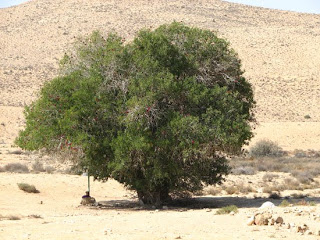 Terebinth tree
Andrey Rublev, who lived in fifteenth century Russia, is a saint. For Eastern Christians, Trinity icons from the Hebrew Scriptures are a distinct genre of icons. Rublev's icon is the best known of this genre and is considered to be a practically perfect icon. εἰκών (eikon) is an image, a likeness, not an exact representation, just as the appearance in Genesis of the "three mortal ones" (the most literal translation of the Hebrew) is a typos of the Holy Trinity, not an actual appearance of the Mystery, which no human being could see and survive (John 1:18).

In a well composed icon everything means something. The exact symbolism of Rublev's icon is disputed to some extent, but there is a consensus among scholars and theologians about its general meaning. Some say that Rublev is not depicting the Trinity, but Christ, Adam, and Michael the Archangel. However, this strikes me as a bit of an overstretch. Plus, nowhere is it forbidden to compose icons of the Blessed Trinity, keeping in mind that by composing an icon of this episode from Genesis, which in Christian terms is seen as a type (typos), not an actual appearance, it seems well within acceptable standards to say that Rublev is depicting the "three mortal ones" as types. 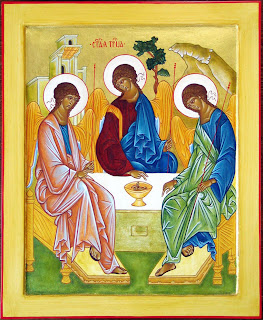 The three figures are seated at a meal around a white table on which is a chalice containing roasted lamb, reminding us of communion and the altar. Of course, there is the tree, under which they are seated. The Holy Spirit is on the right, dressed in a garment of blue, like the sky, and a mantle of green, indicating the Spirit's on-going role in creation.Christ is in the middle in a garment of reddish brown, indicating the earth, and a blue mantle, once again, pointing to the sky. These depict the hypostatic union, the uniting of two natures, Divine and human, in the one person of Jesus Christ. "The Father seems to wear all the colours in a kind of fabric that changes with the light, that seems transparent, that cannot be described or confined in words. And this is how it should be. No one has seen the Father, but the vision of him fills the universe."

"The Father looks forward, raising his hand in blessing to the Son. It is impossible to tell whether he looks up at the Son or down to the chalice on the table, but his gesture expresses a movement towards the Son. 'This is my Son, listen to him…' The hand of the Son points on, around the circle, to the Spirit. In this simple array we see the movement of life towards us, The Father sends the Son, the Son sends the Spirit" (quoted extracts from St. John's Camberwell).

In iconography the mountain represents asceticism. All Christians are called to be ascetical, like Mary, contemplating the Lord. Ascetism is not busy work, do-goodism, which is indicative of a Pelagian viewpoint, which amounts to trying to save ourselves, a futile endeavor if ever there was one! As Don Giussani points to in The Religious Sense, "ascesis means man's work" (pg. 11). Ascesis comes to us from the Greek word askētikos, which means laborious.

Both our reading from Genesis and our Gospel today continue to build on the intrinsic connection between loving God and loving our neighbor as ourselves. While last week's Gospel gave a very challenging answer to the question, Who is my neighbor, this week we focus on the first commandment: "You shall love the Lord your God with all your heart and with all your soul and with all your strength and with all your mind." Today's readings remind us what a challenge this very often is. Abraham entertained three mysterious guests, obliquely identified by the beginning of the episode by the narrator as "the LORD," while Mary and Martha were very aware Who had come under their roof, the One in whom "the whole fullness of deity dwells bodily" (Col. 2:9). What is striking about our pericope from Luke is that it puts to rest a lot of silliness, like "Look busy, Jesus is coming." Perhaps a fitting take away from these passages is summarized well in the Letter to the Hebrews: "Do not neglect to show hospitality to strangers, for thereby some have entertained angels unawares" (13:2).

Our Lord says, "Martha, Martha, you are anxious and worried about many things. There is need of only one thing..." (Luke 10:41-42a). It is He, the One thing she needs, who speaks to her, beckoning her to join Mary, who rests at His feet, thus showing her and us that the one thing necessary is to realize how much He loves you, which realization is what gives any consequent action its meaning.
at July 18, 2010