Christ's institution of the Eucharist

Another salient quote by His Beatitude Maximos IV from one of his interventions at the Second Vatican Council: 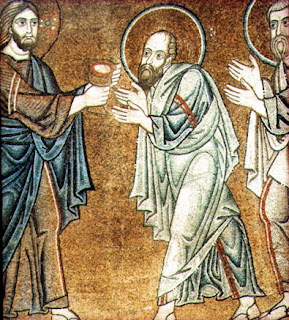 "Christ offered the first Eucharistic Sacrifice in a language which could be understood by all who heard him, namely, Aramaic. … Never could the idea have come to them [the Apostles] that in a Christian gathering the celebrant should read the texts of Holy Scripture, sing psalms, preach or break bread, and at the same time use a language different from that of the community gathered there … because this language [Latin] was spoken by the faithful of that time, Greek was abandoned in favor of Latin. … Why, then, should the Roman Church cease to apply the same principle today?"
at July 08, 2010