"And because they love him, they can’t help offering him up"

"It's the same every morning, only more and more terrible. While David Levy does his exercises, he listens to the latest griefs over the radio. Drought has cut to less than half the livestock of some village in northern Kenya; desperate herdsmen are forced to slaughter their scrawny cattle. In Indonesia, an earthquake kills hundreds. In this country, millions lose their jobs, can’t make payments on their homes. Families are forced to move in with relatives or, sometimes, live out of their cars... Chaos, the chaos that engenders loss of meaning, enters the world.

"Finished with his exercises, he remembers in his prayers the dead and the living. He mourns the dead and worries for the living. But why talk to God when the kind of God one can talk to is, in a sense, the problem in the first place? If he could accept a world in which things just happened—tsunamis buried villages, cancer cells were fruitful and multiplied, bombs exploded, and razor-sharp shards of metal went every which way, into the bodies of the just and unjust alike, and all was what it was, period—if he could accept that, if he could acknowledge that justice is not built into a sacred patterning of things, then there’d be no point speaking to God about anybody’s grief... it’s this idea of the sacred that’s boxed him into a corner. Though who’s to say God is at the root of the sacred? Maybe sacred is a human creation." 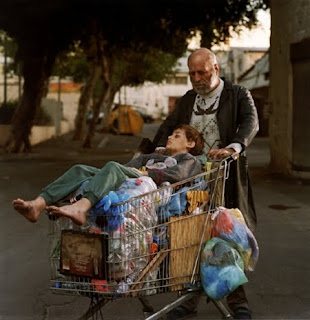 So begins the story I read today at lunch, by John J. Clayton: All the Children Are Isaac, which was published in the current issue of Commentary (subscription required). It is a deeply moving piece. The main character, David, is an observant Jew who vicariously suffers with people. It is not until the story unfolds a little that his current wife, Claire, who is not Jewish, but she is an intellectual historian who teaches about religion, the history of ideas, tells him that he changed when his ex-wife, Sarah, died the previous month. We also learn that Jeremy, a son of Sarah and David, died suddenly, too, sometime well before that.

After reminiscing about how he met Claire, he thinks the trip he took from Massachusetts to California to visit his ex-wife just before she dies, which leads to him to mentally re-live their marriage and the painful death of their son, Jeremy. He and Sarah also had a daughter, Lisa. Danny, his son with Claire, is doctoral student in Chicago, who announces his plans to marry at the end of of the story, which prompts this:

"In a rush, the weight of breath eases. Now David’s lungs fill with joy as irrepressible as grief.

"But at this moment of unexpected joy, David also knows. Knows that this beautiful son, this gift to them and gift to the future, this young man who may, please God, carry, thousands of years into the future, our genetic codes, our cultural codes, has been, since the moment of his conception, a hostage to life. And because they love him, they can’t help offering him up.

"Until Jeremy, David hadn’t really understood: All the children are Isaac. And sometimes the ram is nowhere to be found."

"Abraham 'believed God, and it was counted to him as righteousness'... Know then that it is those of faith who are the sons of Abraham. And the Scripture, foreseeing that God would justify the Gentiles by faith, preached the gospel beforehand to Abraham, saying, 'In you shall all the nations be blessed.' So then, those who are of faith are blessed along with Abraham, the man of faith...if you are Christ's, then you are Abraham's offspring, heirs according to promise." (Gal. 3:6-9. 29). Without Christ, the One who died and rose for me, how else can I make sense of it all, let alone offer myself daily as a sacrifice, trustingly placing myself and everything that is mine in His hands?
at July 19, 2010