Of milk and Oreos

Ah, Jesus' parable of the Good Samaritan! At least among many people that I know, yesterday's Gospel was given a lot of attention, prompting a lot of discussion, which is always a good thing. Of the many masterpieces of Jesus, this one has to rank right up there towards the top. The really new thing that the Lord teaches, there being really nothing earth shattering in the two commandments reiterated by the lawyer who questions the Lord, is that my neighbor is the one in need, even if he is different from me, if I'm white and she's black, if he's LDS and I'm Catholic, if I am straight and she's a lesbian, or even if he is a Yankees fan. It would have been a difficult pill for a Jewish audience to swallow that it was a Samaritan who showed them how to adhere to the law!

As a thought experiment, plug in someone from the group of people you view least favorably, putting that person in the role of the Good Samaritan, and you get an idea of just how challenging Jesus' teaching is. Once again, this parable boils down to the necessary connection between loving God and our neighbor, while challenging us as to just who our neighbor is. As human beings we tend to like people who are like us. We see this in the phenomenon operative in our society today that we call self-segregation. In other words, like peoples choosing to live together, apart from those who differ from us racially, or economically (prosperity often breaking down along racial lines). Even our friendships work in kind of this way. Perhaps the most challenging aspect of this parable for religious people is that helping someone in need is more important than our religious obligations, like, say, attending Mass. The question really becomes, how can you ignore someone in need and continue merrily on your way to church?

I realize that by stating the matter so forthrightly there is a temptation to privilege one over the other and ultimately arrive the conclusion that maybe going to Mass regularly isn't important. Nothing could be further from the truth. After all, there are ways we love God that are distinct and distinguishable from the ways in which we love our neighbor, despite the fact that I can't do one without doing the other. After all, Jesus does not dispute that loving God is the first commandment. It's like Oreos and milk. You can eat Oreos without milk and drink milk without eating Oreos. In fact, we drink milk most of the time without Oreos, but how many times do you eat Oreos without milk? 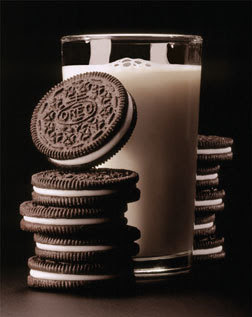 I can't love God without loving my neighbor and I can't love my neighbor without loving God: "If anyone says, 'I love God,' and hates his brother, he is a liar; for he who does not love his brother whom he has seen cannot love God whom he has not seen" (1 John 4:20). The inevitable question is, which is the Oreo and which is the milk? Well, I'd have to go with loving our neighbor as milk and loving God as the Oreo. Besides, Oreos make milk taste so much better, just like knowing Jesus Christ makes life so much better. I could live without Christ, but why would I want to? Unlike Oreos, which should only be consumed once in awhile and in limited quantities, Jesus is life-giving bread. So, unlike Oreos, He is not a luxury, but a necessity, at least for me.

I think one could make an interesting case to reverse this analogy, which only goes to show their interconnectedness.
at July 12, 2010

Email ThisBlogThis!Share to TwitterShare to FacebookShare to Pinterest
Labels: Reflections and Ruminations, scripture