Borne of an authentic desire to really live

There are a lot of complaints about the so-called Catholic blogosphere. Heaven knows I have certainly voiced a few, which contradiction is not lost on me. At the end of the day, the Catholic blogosphere is no different from the Church, even from most parishes, which is where Church happens for virtually all of us. Catholic bloggers, at least the ones I know, are a pretty introspective bunch of people, maybe overly so at times (I know I am, as this post proves), worried about the effect our blogging efforts have, or even whether our efforts have any effect at all. Of course, the Catholic blogosphere is not monolithic, or even all that interconnected, with each person making her/his own contribution on matters of concern to them and that elicit a response. However, a lot of us are interconnected, not to the point of being organized, but just touching bases, airing matters of concern, trying to be accountable, etc. This is an indispensable thing for me because, like the Church at times, especially at the parish level, which is nothing new (read 1 Corinthians), the blogosphere can be a pretty rough and tumble place.

So, it is always nice to discover new and interesting on-line voices. This past week I did just that via a comment made on my homily last Sunday by the author of From the Pews. As with all writing, the blogger, Catholic or not, has to find his/her distinct voice, which is not a matter of creating a persona that has little or nothing to do with who you are, but a way of communicating something of yourself, which is the hallmark of both authentic communication and education. 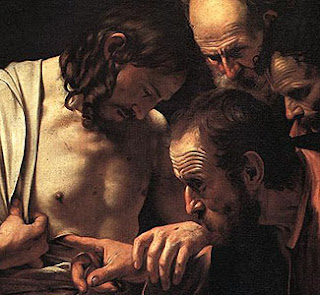 A detail from Caravaggio's The Incredulity of St. Thomas
All of this is a fitting reflection for today's Feast of St. Thomas the Apostle, the one known as Doubting Thomas, who said, upon hearing the other apostles tell of their encounter with the resurrected Lord, "Unless I see in his hands the mark of the nails, and place my finger into the mark of the nails, and place my hand into his side, I will never believe" (John 20:25). As we all know, the Lord showed Thomas the proofs he demanded eight days later. This shows that Thomas' initial doubt was not borne of a cynical skepticism, but of an authentic desire, not only to see and believe, but to follow, to live. St. Thomas' encounter with the Risen Lord gave his life, to borrow words from the Holy Father "a new horizon and a decisive direction" (Deus Caritas Est par. 1).

Indeed, encountering the Risen Christ can't but give one hope, which is the flower of faith-faith being knowledge, not mere belief, which reduction amounts to hoping against hope (i.e., wishing). Hope is certainty about our destiny, the point and purpose of our lives, showing us that "Christ does not save us from our humanity, but through it; he does not save us from the world, but came into the world, so that through him the world might be saved" (Pope Benedict XVI Christmas Urbi et Orbi 2006).

As far as I am concerned, insofar as one's blogging is in the service of the Gospel, which means it is borne from the same desire as Doubting Thomas' initial disbelief, which was perhaps the result of him thinking it too good to be true, then there is something of value. Who knows, it is maybe even the manifestation of a particular charism, a gift of the Holy Spirit? I believe that it is for this reason that after an initial period of decrying Catholic blogging, being suspicious of it, discerning its value, that even the Pontiff now actively encourages on-line efforts.
at July 03, 2010