A thought from the road

Throughout On the Road Kerouac "distinguishes between authentic work and the things people do so they can buy more stuff." So, writes John Leland.

Sal Paradise, not only rejects upward mobility, but is intent on being downwardly mobile. For Sal, as for Kerouac, "upward mobility [is] a plot to make men do pointless things, turning them into parodies of the American Dream."

When we consider the great technological advances that have increased productivity exponentially over the past two decades, we have to consider the good with the bad. Despite our ability to be more productive, I don't know many people who work less, but I know many who work more. Besides that contradiction, as Peter Hitchens recently wrote about, these technologies certainly have a dehumanizing effect. He observed in his post Human Beings Check Out, "The thing about the attempt to automate supermarket checkouts is that it depends on us - just as internet and telephone banking, with all their problems, could not have been introduced without our willing co-operation." Just a thought as the economy still lags and nationwide unemployment persists at around 10%. 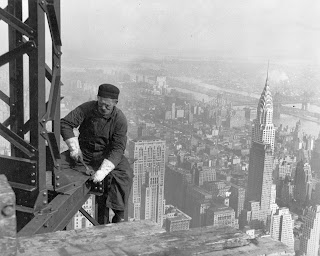 It seems an ideal time to rethink a lot of things, especially one's personal practices. In short, the reality is we need to focus less on buying stuff. After all, it was rampant consumerism, financed by consumer debt (borrowing 110% of your equity in your home to go on a cruise, buy a jet-ski, or pay down credit card debt), that got us into this mess. Prior to the meltdown, this kind of consumer spending constituted somewhere around 75% of our GDP, creating an unsustainable situtation. Hence, repeating the fundamental economic failures of the past it is not going to get us out of our current slump, let alone put on us on solid ground.

Downward mobility of a kind is just what advanced countries, who consume resources at an unprecedented pace need, as three successive popes (not including Papa Luciani) have taught. Like the other two evangelical counsels, chastity and obedience, poverty applies to Christians in every state of life. As Don Giussani taught, poverty does not mean starving on a street corner in rags, which is destitution. Rather, poverty has to do with your relationship to things; with the question, In what, or in whom, do I place my hope?, which is nothing less than how you go about achieving your deepest desire, which is to be truly happy. As such, it calls for a certain detachment.

Anyway, Leland warns in the subtitle of his book that the lessons of On the Road are not what you think. This post brings July to a close. Next month marks the 5th anniversary of the clunky and uncertain beginning of what was then known as Scott Dodge for Nobody.
at July 31, 2010

Email ThisBlogThis!Share to TwitterShare to FacebookShare to Pinterest
Labels: Economics