In obsessing, as is my wont, I undercovered an interview from 2007 in the British on-line magazine, Notes from the Underground, with Carolyn Cassady, the wife of Neal Cassady, who is portrayed as Dean Moriarity in On the Road. She is ostensibly portrayed in the book as Camille. 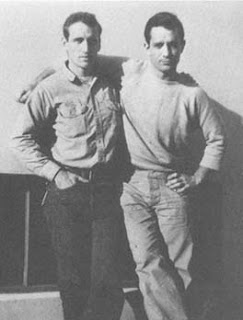 Neal Cassady and Jack Kerouac
The entire interview is worth reading. It's funny how reading a short little book found in the remainder bin of a suburban chain bookstore can spark a raging fire of memory, bringing to light, again, thoughts I haven't thought in years! Kerouac despised the popular image of him. He saw it for what it was, a market ploy. A sort of cartharsis achieved, at least for now...

"'Jack', she mourns, 'got dragged into it…' Jack Kerouac is a great example of what misrepresentation can do to a writer. He wanted to join the canon of great American writers – Jack London, Tom Wolfe, Ernest Hemingway-and the role he was cast in instead proved devastating, as Cassady explains. 'He was called the "King of the Beats" and the "Father of the Hippies", he told me that he was going to drink himself to death. He was so sensitive, so self-conscious, and so paranoid that he just couldn’t stand the image that had been created of him. All the hippie stuff was just so alien to what his dreams had been…it destroyed him.' To what extent does an artist have control over how his work is perceived once it’s in the public domain? It’s a fascinating case study of an artist trying to escape his caricature. As every depth was plunged for commodity –'his awful poems, his awful drunken doodles, his awful play' – Jack found the only means of escape in alcohol."

Email ThisBlogThis!Share to TwitterShare to FacebookShare to Pinterest
Labels: Community of the Heart