"When in the Course of human events..."

On this fourteenth Sunday of Ordinary Time, we also celebrate the founding of the United States of America, a truly unique country on the face of the earth and in human history, too. It was 4 July 1776 that the Continental Congress adopted what we now know as The Declaration of Independence, which announced the independence of the thirteen colonies from Great Britain. The rift was caused by many issues, which are pain-stakingly laid out in the Declaration, but they are all the result of the colonies having no representatives in the House of Commons to look out for and represent their interests. Interestingly, the great Edmund Burke was favorably disposed to allowing the American colonists to duly elect and send representatives to London. How different history would have been had King George III and his ministers heeded Burke's relatively modest proposal!

The Declaration of Independence is notable for its rather reasonable and measured tone, as opposed what came out of the disastrous French Revolution years later, though the reasons for the radicalism of the French Revolution arose from an entirely different set of historical circumstances.

At the heart of the Declaration are these words:

"We hold these truths to be self-evident, that all men are created equal, that they are endowed by their Creator with certain unalienable Rights, that among these are Life, Liberty and the pursuit of Happiness. — That to secure these rights, Governments are instituted among Men, deriving their just powers from the consent of the governed, — That whenever any Form of Government becomes destructive of these ends, it is the Right of the People to alter or to abolish it, and to institute new Government, laying its foundation on such principles and organizing its powers in such form, as to them shall seem most likely to effect their Safety and Happiness." 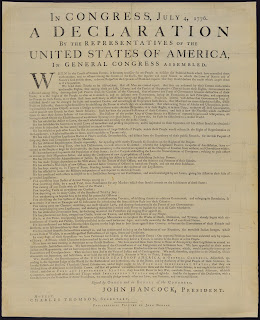 Two hundred and thirty-four years later the state of our union is still strong. As always there are questions and quandaries, excesses and corrections. These past ten years have been quite tumultuous, but that is indicative of a healthy democracy. I know it grieves many, but the fact that more citizens are paying attention to what their government does and are holding our leaders accountable is a good thing, not a bad thing. Besides, looking back over our history, including the Declaration of Independence's long list of grievances against King George III, when has politics ever been entirely civil?

I am proud to be a citizen of these United States. Moreover, I am humbled when I recognize how blessed I am. I am also more than a little troubled when I realize something Dr. Glenn Olsen puts his finger on in the first chapter of his new book, Turn to Transcendence, taking his cue from Alasdair MacIntyre, namely that "liberalism as a philosophy came to allow liberté (from libertas = unbounded or unrestricted) to trump all other values" (pg. 12). He is not discussing liberalism as opposed to conservativism, at least as these terms are understood in the contemporary context of U.S. politics. Rather, both liberalism and conservatism operate under this same premise. As a Christian, this puts me in mind of what St. Paul writes to the Galatians: "For you were called to freedom, brothers. Only do not use your freedom as an opportunity for the flesh, but through love serve one another" (5:13). This is also set forth in 1 Peter: "Live as people who are free, not using your freedom as a cover-up for evil, but living as servants" (2:16). Both these passages show us that liberty, unbounded/unrestricted freedom, freedom construed as an end in itself instead of a means to the end for which we are made, is not tenable on Christian grounds. As Pope John Paul II pointed out so often, freedom must be anchored in truth, the truth about the human person and the truth about the world we inhabit.
at July 04, 2010