Yea, I know the title is obvious, but sometimes we can stand being reminded of the obvious, like when we attend Mass each Sunday.

Due to absolutely no planning on my part, this is becoming culture week here at Καθολικός διάκονος. It began with my purchase of John Leland’s wonderful treatise on Keoruac’s On the Road last week and my subsequent reading it. Today, I read Stephen Hunter’s article in Commentary: Clyde and Bonnie Died for Nihilsim, about the 1967 film featuring Warren Beatty and Faye Dunaway. While it is a very insightful article about this film and what it tells us about the time it was made, which affects us now, it caused me to member that Faye Dunaway is an adult convert to the Catholic Church. In fact, she begins a 1999 article for Esquire magazine in the following way:

"I'm a bit high maintenance, but it gets your attention. A little hot and cold never hurts.

"I regret so much. I've made mistakes. I've hurt people. I've done things
I'm not proud of. But on the other hand, that way lies madness, you know?

"It doesn't really matter what other people think.

"Great artists never know if they're making the right choice. I'm a new Catholic. I love the church; I love mass. I go every morning at 6:30. When I'm on the right track spiritually and emotionally, things happen in my life. It's mysterious." 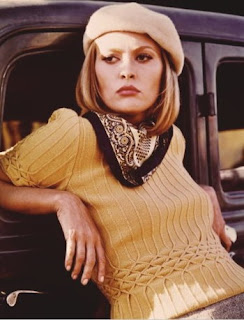 Reading this, in turn, caused me to think about Andy Warhol’s faith; the fact that he was, by all accounts, a practicing Catholic his whole life, as a recent exhibit at the Brooklyn Museum, brought to my attention over on The Deacon’s Bench, reiterated. Of course, this is old news, as an article by art historian James Romaine, which originally appeared in Regeneration Quarterly back in 2003, shows. This piece subsequently found its way over to the website Godspy in the same year.

It is important to point out that Warhol(a) was a Byzantine Catholic. Hence, I think Romaine is very spot-on by writing that "Warhol's strategy of representing heaven by repeated images has been linked to Byzantine icons, which limit individual creativity in favor of a standardized form."

Romaine’s article, Transubstantiating the Culture: Andy Warhol’s Secret, is succinct and certainly open to interrogation from many angles, but I think what he writes corresponds well with Warhol’s life and art, as this snippet towards the end of his piece indicates:

"The popularity of Warhol's work is a reflection of our own hunger for such transformation. Like all art, it raises questions: Are we hungry enough to accept anything offered to us? How are we to be discerning? Was Warhol discerning? If we are to 'test each spirit,' should we filter out Warhol? Was Warhol so hungry for something divine that he too easily accepted substitutes for the one thing that would satisfy him?" 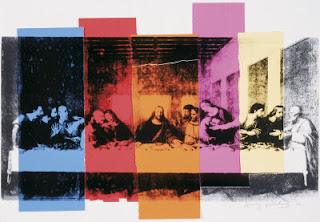 Email ThisBlogThis!Share to TwitterShare to FacebookShare to Pinterest
Labels: Cultural