Why Afghanistan?, or How soon we forget

Deacon Eric brought to my attention yet another gaffe committed by Michael Steele, whose time as chairman of the Republican National Committee has been marred by so many missteps. Referring to the recent refocus of attention on Afghanistan in the wake of what Peggy Noonan recently referred to as Gen. Stanley McChrystal's suicide bombing of his own distinguished career, Steele said: "Keep in mind again, federal candidates, this was a war of Obama's choosing. This is not something the United States had actively prosecuted or wanted to engage in."

One cannot call Steele's remarks an attempt at revisionism because they are too partisan and ideological to so distinguish them. Especially as we begin this fourth of July weekend, let's remind ourselves that we went to Afghanistan way back in 2001 to insure that the then-Taliban-led and lawless country, governed by a group of misguided, pseudo-Islamic, oppressive, violent, know-nothings, could never be used again as a terrorist safe-haven from which to attack, not only the U.S., but any civilized nation. Let's also remember that our intent and resolve were bi-partisan in the wake of the devastating attacks on the World Trade Center, the Pentagon, and the failed attempt to demolish the White House. With Pres. Our allies were firmly with us. Along with Pres. Obama and others, I agree and have written at great length on this blog towards the last few years of the Bush Administration, that Iraq drew our attention away from Afghanistan and become a years long diversion. 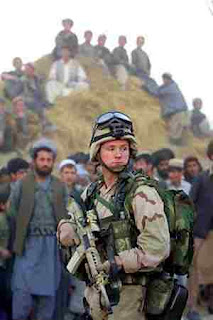 I laud Pres. Obama for refocusing our attention on just what we are trying to accomplish in Afghanistan and for acting appropriately and decisively in the face of the now infamous Rolling Stone article. Let's hope he is not forced into an ill-considered and premature withdrawal, which would diminish the sacrifices already made there, by either those on the left, or those on the right who want to see him fail at all costs. I am very happy that he wisely chose Gen. Petraeus to oversee our efforts there, which also benefit the people of the Afghanistan.

Over many years I have come to see that for the most part party politics make everybody involved stupid because parties almost always privilege ideology over truth. While I am at it, especially given how critical I am typically of the Obama Administration, especially for its misguided economic policies, profligate spending, and utterly incoherent foreign policy, especially in the Middle East, for which I am utterly unapologetic, I am also glad the president is now aiming at reforming immigration, gratified that he is proposing essentially the same comprehensive reform as that proposed by Pres. Bush. One hopes it can get some bi-partisan traction, which won't happen until after the fall elections.
at July 02, 2010

Email ThisBlogThis!Share to TwitterShare to FacebookShare to Pinterest
Labels: Politics