Back in August I posted on how my diocese, the Diocese of Salt Lake City, responded after the U.S. Bishops approved the so-called Dallas Charter (see "Holy Mary, Mother of God, pray for us sinners now...") back in 2002. In a report publicly released on 14 June 2002, our then-bishop, George Niederauer, who went on to become archbishop of San Francisco a few years later, divulged the number of clergy (all of whom were priests), going back to 1950, who had credibly been accused of sexual abuse: 13 in total. In the report he also gave the number of reported incidents: 18. Additionally, he provided information about what the diocese had paid out to that point to victims: $58,000 in total, $43,000 for pastoral outreach, $15,000 on legal fees, and $0 in settlements. $20,000 of the cost of pastoral outreach was covered by insurance. Then-Bishop Niederauer did not divulge the names of abusive clerics, where they served, what happened as a result of their being credibly accused, or their current status. Neither did he reveal the nature of any of the credible allegations.

Today, the current bishop of Salt Lake City, Oscar Solis, released a statement and, more importantly, a detailed spreadsheet that provides the names of priests against whom credible accusations have been made, along with other information concerning the allegations.

By my count, since 14 June 2002, twenty more allegations have come to light. Considering one allegation, alleged to have occurred earlier this year, was dismissed by the Utah Division of Child and Family Services (DCFS), the number of credible allegations released today can be numbered at 19. Seventeen of the of these additional credible incidents are attributable to twelve priests. One allegation is against a religious brother who belonged to the Oblates of St. Francis de Sales and one was made against a seminarian. Of the twelve priests, three had been credibly accused of at least one incident of sexual abuse prior to the June 2002 report.

As noted, the 2002 report gives as 13 the number of priests with at least one credible allegation of sexual abuse. The spreadsheet put out today includes nineteen names. As I pointed out above, two of those who appear on the spreadsheet were not priests. This leaves 17 priests who, since 1950, have at least one credible allegation of sexual abuse against them, according to today's disclosure. Judging by the dates given as to when the diocese learned of the allegations, there were credible allegations against 9 priests that the diocese did not receive until after the release of the June 2002 report. For example, one incident, involving Paul Franco, was reported to the diocese on 17 June 2002, just three days after the diocese's initial report. 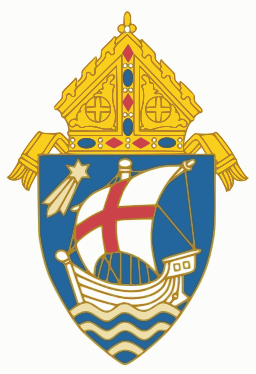 Coat of arms of the Diocese of Salt Lake City


Comparing today's report to the 2002 report, the number of priests who have served in the diocese since 1950 and who have credible allegations of sexual abuse against them should go up from thirteen to twenty-two. But today's accounting lists only 17. I realize these things can be trickier than many people assume and that there may be some older instances for which complete information is not available, but it seems to me there is a difference of 5 priests between the 2002 report and today's disclosure. Perhaps it is a case of a few dates entered erroneously. In any case, I laud the transparency of today's data release. I am very pleased at detailed information provided. I have no doubt about my diocese's commitment to safeguarding young people and vulnerable adults.

According to the 2002 report, from 1950 to 2002 a total of 476 priests had served in the Diocese of Salt Lake City. The number of priests who have served in our diocese has increased in the past 16 years. I do not know by how many. Judging from some of the questions I received after my post last August, the most valuable information on the spreadsheet consists of the current status of these men, what actions were taken in light of the credible allegations against them, and where each one served and the years in which they served in each place.

Seven of the seventeen priests on the list are now deceased, as is the religious brother. It appears six of the eleven who are still alive were removed from the clerical state, five forcibly and two voluntarily by leaving the priesthood. One of those forcibly removed from the clerical state, James Rapp, is incarcerated in Oklahoma. Four men were retired from ministry and had their faculties to minister as priests removed. In this latter category is David Gaeta. In August of this year he was credibly accused of two instances of sexual abuse that are alleged to have occurred in Ogden in 1982. His retirement and the removal of faculties was announced today by Bishop Solis. According to the bishop's statement, "Removal of faculties means the individual may no longer engage in public ministry, including dressing as a priest, presenting himself as a priest in good standing, performing public Masses, hearing Confessions, or conducting Baptisms, Marriages, or administering other Sacraments." The seminarian against whom there is a credible allegation of sexual abuse has long since been dismissed.

Looking at the two publicly available reports, it would appear that the total number of incidents reported since 14 June 2002 is one more than double of the number previously reported. But instead of 37 incidents (18 + 19= 37), the report released today includes 29 credible allegations (30-1; the one being the allegation dismissed by the DCFS). Not dismissing the difficulty of this kind of accounting and reporting, I think this represents progress. Looking at the dates on which the additional nineteen sexual abuse incidents are reported to have taken place, 2 of those have occurred since June 2002. One of those is the incident involving the now-dismissed seminarian and that happened in 2002. The other credible report was from 2003. There were no updates on any financial pay-outs the diocese may have made since 2002.