After praying Morning Prayer today, the rest of my daily devotional prior to heading out to preach and serve at Mass was reading and meditating on the Rule of St Benedict. In conjunction with reading Abbot Patrick Barry's English translation of the Rule, I am reading Esther de Waal's commentary on it: A Life-Giving Way. Chapter 15 of the Rule was the focus of today's meditation.

The title of the fifteenth chapter of the Rule of St Benedict is "When the Alleluia should be said." Alleluia, it bears repeating, is a Hebrew phrase that has passed through Greek, Latin, English and pretty much all languages spoken by people who have received the Good News more or less untranslated. In its original language, the phrase means "Praise Yahweh." I know, I know, we're not supposed to use the tetragrammaton. In any case, because we are an Easter people, whenever Christians exclaim Alleluia it is an expression of Paschal (i.e., Easter) joy.

In her commentary, de Waal asserts that not saying Alleluia during Lent, "is a mark of the fasting and repentance of the forty days waiting for the coming of Easter." What I take this to mean is that not saying Alleluia during Lent generates anticipation. How good it feels to proclaim Alleluia at the Easter Vigil! How wonderful it is, as a deacon, to say to the presider at the great Vigil, even before it is sung: "Reverend Father, I bring you a message of great joy, the message of Alleluia." Does not proclaiming Alleluia! at Christmas also bid us to look forward to Easter?

"This short chapter [15] encourages me," de Waal wrote, "to ask myself what role the reality of death and new life, of dying and rebirth, plays in my life. Do I say Alleluia sufficiently often in recognition of the victory of the Cross?"

As nice a meditation as it was, upon finishing it, I thought it really didn't cohere with the liturgical season we're currently celebrating: Christmas. Yes, I tend to be rather didactic, not to mention pedantic, at times. Throughout the liturgical year, the Paschal Mystery unfolds. It culminates with our celebration of Christ's resurrection. But remembering this today took some time. In future, I will try never to lose sight of this! 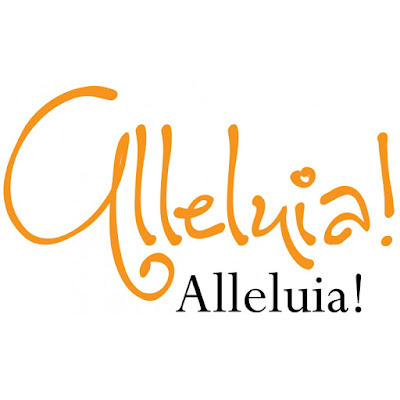 At both Sunday Masses today, we sang the first two verses of "Silent Night" as our second Communion hymn. Singing verse two, which is my favorite verse, I was deeply moved by its words:

Upon my arrival at the Church, I had to wait to set up for Mass because, this week, our communal Rosary was recited prior to the early Mass. As I busied myself in the vestry, I could hear the Rosary through the speaker. As I listened, I heard the fourth Glorious mystery- Mary's bodily Assumption in heaven- invoked. I though to myself, "How liturgically tone deaf! Why do we do things in a such rote way? The Joyful mysteries would be more appropriate for today." It was not until quite awhile later, after the mid-morning Mass, when I was walking Maisey, our Australian Shepherd, that I thought, like the heavenly hosts who sang Alleluia in "Silent Night," meditating on the Glorious mysteries at the end of the Octave of Christmas was a great opportunity to say Alleluia!, "in recognition of the victory of the Cross."

It also occurred to me during my walk that even during the penitential season of Lent, Sundays remain celebrations of the Christ's resurrection. Saying Alleluia more often, as a reminder and mini-celebration of Christ's victory, is a great resolution for the New Year. After all, Christ's Easter victory is our Easter victory.
at December 30, 2018