"Prepare the way of Lord"

In his detailed commentary on St. Luke's Gospel, Franciscan scholar Robert Karris, commenting on the first two verses of the third chapter, points out that these two verses are "one long periodic sentence (kinda like this sentence!)" (The New Jerome Biblical Commentary, 685). Karris calls these verses "an elegant beginning to Luke's story of how John [the Baptist] affects world history" (Ibid). Karras then immediately points out something even more important: "just below the surface of literary finesse lies the tragic reality of negative response to God's word and its messengers" (Ibid).

Unlike Luke's Infancy narrative, all of the rulers mentioned in this passage seem to accurately correspond with the period about which the inspired author is writing. Relevant to the negative reception of God's word and its messengers, Karras points out that with the exceptions of Philip and Lysanias, the latter of whom we know very little, all of the rulers mentioned are complicit in Jesus's crucifixion or, as in the case of Herod the Great, among whose sons his kingdom was divided at his death, the attempt to kill Jesus when he was an infant (see Matthew 2:1-12). God's word, is rarely received as good news by the rich and powerful. It is rejected by the rich and powerful as well as by the comfortable and complacent because it is a word that seeks to overthrow the status quo. For the rich, powerful, comfortable and complacent, God's word is a huge provocation, the implications of which are huge, at least for those who hear it.

Keep in mind that it is only two chapters earlier in Luke that we encounter the Magnificat of the Blessed Virgin Mary. Far from being a sloppily sentimental effusion of fluff, the Magnifcat is highly subversive. In this timeless Canticle, Mary proclaims that God, through his Anointed, "has scattered the proud in their conceit"; "has cast down the mighty from their thrones and has lifted up the lowly"; "has filled the hungry with good things and sent the rich away empty" (see Luke 1:46-56). Kathleen Norris observed this about the Magnificat:

Mary utters a song so powerful that its meaning still resonates in profound and disturbing ways. In the twentieth century Mary's "Magnificat" became a cornerstone of liberation theology, so much so that during the 1980's the government of Guatemala found its message so subversive that it banned its recitation in public worship 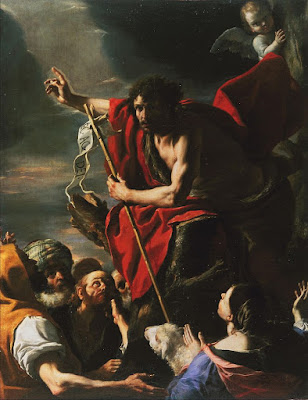 
After this "elegant beginning" to the ministry of the Baptist, our passage continues, telling us: "John went throughout the whole region of the Jordan," we learn, "Proclaiming a baptism of repentance for the forgiveness of sins" (Luke 3:3).

As the subsequent theological geology, taken from Isaiah 40:3-5, shows, the effect of the proclamation of the word of God is to completely reshape the world. By "world" I mean what Wittgenstein meant: "The world is all that is the case" (Tractatus Logico-Philosophicus, 1). It's easy to see why those for whom the present state of the world works well, or very well, might be inclined to outright reject the word of God. More insidiously, many are inclined to alter it in ways that make it congruent with the current state-of-the-world. This view calls for a certain passivity as we await a cataclysmic end to the world.

I presume anyone reading this has either accepted God's word or is at least not hostile to it in its true meaning, while rejecting its many "Christian" distortions. If you're like me, there's plenty in God's word to challenge and daily provoke you to wake up and begin participating in God's reign, which is already present, even if it's only the size a metaphorical mustard seed. This is what Advent, especially its first week, is all about. Very often we seem content to revel in syrupy sentimentalism.

If you've responded, or maybe more accurately, you're endeavoring to respond, or at least have not rejected God's word, then God has begun a good work in you. Through your cooperation and perseverance, God "will continue to complete it until the day of Christ Jesus" (Phil 1:6). It's time to let God's word cause an earthquake in your soul, thus changing your spiritual geography in order to conform you more to the image of Christ, whom we claim to follow, or at least whose message we deem worthy of our attention.
at December 09, 2018