"This way or no way"

I spent a good part of the early afternoon today reading The Theology of Samuel Beckett by John Calder while listening to David Bowie's final album, Black Star. At least for today, prior to the beginning of the Solemnity of the Immaculate Conception of the Blessed Virgin Mary, which starts at sundown (about 5:00pm where I live), engaging in these activities constitute my rebellion against Christhaunkwanzika. I don't mind sharing that engaging in these activities feels to me like Advent: sitting in the dark waiting for a glimmer of light. Being a bit more honest, it's more accurate to say I am savoring the darkness a bit.

Creation, growth and advance in terms of progress is not a positive thing but a disaster. Even Darwin did not perceive any benevolence in evolution, but only the continual advance of power. In economic terms capitalism exactly fits the description, and greed, which is the motivating force behind power, although looked at with a negative eye by much of civilized society, is certainly responsible for much of the suffering that pervades the world (The Theology of Samuel Beckett, 77)

Unsurprisingly, this is very Schopenhauerian. That Beckett was well acquainted with Schopenhauer's philosophy is a well-established fact. 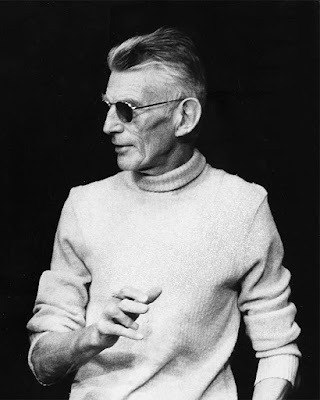 Worstward Ho takes Darwinian evolution as its starting point, while Ill Said, Ill Seen is Beckett's creation account. God is the narrator of Ill Said, Ill Seen. While Worstward Ho has clear Schopenhauerian bent, Ill Said, Ill Seen is rooted in the philosophy of one Arnold Geulincx (1624-1669), who was Dutch or, what amounts to virtually the same thing, a Flemish-speaking Belgian. According to Calder, Beckett came across Geulincx's Ethica almost by accident while a student at Trinity University in Dublin. According to Calder, as a young man, Beckett took to heart something Geulincx wrote: Ubi nihil vales ibi nihil velis (The Theology of Samuel Beckett, 16). What this sentence seeks to communicate is that where one is nothing, one should act accordingly, as though s/he is nothing.

This disciple of Descartes took his line of inquiry into the nature of God and the human condition way beyond Descartes's investigations. While Descartes endeavored to remain within the bounds of Catholic orthodoxy, Geulincx did not. Epistemologically, Geulincx was what is now called an occasionalist and an extreme one at that. In other words, he believed that God is the cause of all events and that human perception of cause and effect relationships is illusory. Metaphysically, this little-remembered Cartesian disciple saw "God as being so far away that he was not necessarily aware of our very presence, a remote group of intelligent beings on a far away planet" (The Theology of Samuel Beckett, 16). A metaphor of Geulincx that stuck with Beckett and is evident in virtually all his work is that an aware human being is like someone on a ship headed West but who wants to go East. The aware person cannot steer the ship eastward or get off the ship. short of death. Therefore, all s/he can do stand at the stern of the ship, thus placing herself as far East as she possibly can.

As far as what turned out to be Bowie's final album, I am eager to see a documentary released last year: David Bowie: The Last Five Years. Andy Green's review of this film, "Inside David Bowie's Final Act: New Doc Dives Into Lazarus," begins with this paragraph:

In October 2015, David Bowie decided to end his cancer treatments after learning the disease had spread too far to recover from. The very same week, he traveled to a Brooklyn soundstage to shoot a video for his new song “Lazarus,” the name of a biblical figure that Jesus brought back from the dead. Bowie spent the day in a hospital bed as cameras captured him with a bandage around his head. "Look up here, I’m in heaven," he howled. "I’ve got scars that can’t be seen"

In the anti-spirit of the of this soul-sucking season, I offer a second Friday traditio: "Lazarus" by David Bowie.