"When the violence causes silence"

Today the Catholic Church celebrates the Feast of the Holy Innocents. On this day Christians commemorate those boys aged two and under "in Bethlehem and its vicinity" who were murdered by order of King Herod (Matt 2:16-18). The liturgical color for today's feast, as it was two days ago on the Feast of Stephen, as it is on the feasts and memorials of all the martyrs, is red; red for blood. While we celebrate Stephen as the first Christian martyr, often referring to him as the Church's "proto-martyr," I think the murdered children of ancient Bethlehem make a better claim to the title proto-martyr. "Proto-" means not only "original" but "primitive."

This year in particular, we must not be content to let the Feast of the Holy Innocents be merely a commemoration of a horrific event that we've somehow managed to sanitize over two millenia. Rather, we need to let today's feast challenge us. This month alone two children immigrating from Guatemala died while being detained by the U.S. government. Felipe Gomez Alonzo, age 8, died in New Mexico on Christmas Eve. Jakelin Caal, age 7, died on 8 December, the Solemnity of the Immaculate Conception of the Blessed Virgin Mary, in El Paso, Texas.

Let's not forget that 2018 was the year that the U.S. government instigated a truly dehumanizing policy of separating immigrant children from their parents and holding these children in harsh and inhumane conditions, including putting them in cages (see "The Trump administration’s separation of families at the border, explained"). We need also keep in mind the U.S.'s involvement in Saudi Arabia's incomprehensible war in Yemen. This war has also been the the cause of illness, starvation, and death from many children in southern part of the Arabian peninsula (see "Yemen conflict: A devastating toll for children").

Even though I have posted on the topic extensively in the second half of this year, it would be hypocritical of me, not only as a Catholic but as a cleric, not to mention the additional revelations about child sexual abuse in the Roman Catholic Church in the United States. While these revelations are about abuse that happened years, they help us to see the horrifying scope of the problem and how far the Church's hierarchy has to go in order to repent. 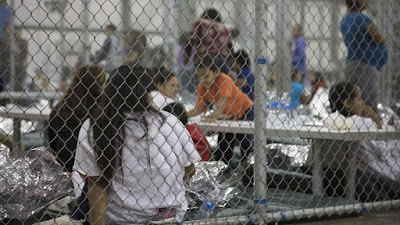 Immigrant children separated from their parents being held in cages in Texas in 2018, courtesy of The Guardian


Sadly, we cannot relegate today to a cozy little observance on which we recognize and appreciate the efforts of altar servers- though we should appreciate every day the efforts of young women and men who serve at Mass. Instead, we need to let today's observance not only challenge but provoke us to stand-up for children all over the world. The Lord loved children, which was a bit out of the ordinary in his day. While we don't need to go all Holden Caulfield, which literary character is a projection of a rather unhealthy aspect of its author's psyche, we need to stand-up for those who cannot stand-up for themselves. Happy Feast of the Holy Innocents! The spirit of Herod is alive and well and not just in the United States but in parts of Europe and other places too. We must resist this spirit using all the creative non-violent means at our disposal.

It's difficult to think of music to pair with the somberness today's feast forces on me. It's not my ideal to tinge the last traditio of the year with so dark a color. But I am going with the song "Zombie" by The Cranberries. "Zombie" was written by the late and badly missed Dolores O'Riordan to protest two IRA bombings carried out by the Provisional IRA in Warrington, England in 1993. The song was dedicated to the two young victims of that attack: Johnathan Ball, who was 3 years old and Tim Parry, who was 12 when he was murdered. The version I chose is a beautiful acapella version recorded this year in O'Riordan's memory:

As we stand on the threshold of a new year, let's remember that violence begets violence.
at December 28, 2018