We shall see the King when he comes

Today's reading from Luke's Gospel is wonderful for showing us how, as followers of Christ, it's always the end of the world until the end of the world (see Luke 25:25-28.34-36). Our Gospel begins with Jesus telling his followers about cataclysmic events that will portend his glorious return. This is followed by him exhorting them to live vigilantly in anticipation of his return. Looked at a certain way, the second part of this passage neutralizes the first.

There has never been a time in human history when there were not the kinds of cataclysmic "signs" the Lord points to in this passage as indicative of his return. According to news reports, back on 11 November, a "tremor occurred... near the archipelago of Mayotte, a collection of French islands in the Indian Ocean between Madagascar and Mozambique." So massive was this tremor that it registered on seismometers around the world, "from New Zealand to Canada - and even in Hawaii." Nobody is clear as to what caused this huge seismic event. Best assessments are that it was either volcanic activity or a meteor strike. But its cause remains unknown. Does this mean Jesus is due back by month's end? My point? There is no way to calculate the Lord's return.

Let's face facts, the earth is far more endangered by reckless human activity than by natural disasters. What do I mean by reckless human activity? Things like dead whales being found with loads of plastic, which was dumped in the ocean, in their stomachs (see "Yet Another Dead Whale Found With Pounds Of Plastic In Its Stomach"). How will we, to borrow the words of today's Gospel "stand before the Son of Man" and answer for this? My point? We should be far more worried about our environmental stewardship than about natural disasters. We can do something about the former and nothing about the latter. As we know, when it comes to natural disasters caused by extreme weather events, rapid climate change caused by human activity is increasingly caused by the same kind of pollutive activity that results in whales consuming deadly plastics. Maybe a good Advent activity would be a careful reading of Pope Francis's encyclical letter Laudato si'. Follow this up by finding practical ways to be a better steward (see "Reusable coffee cups? Tote bags? Here's the truth about what you can do to be more climate-friendly"). 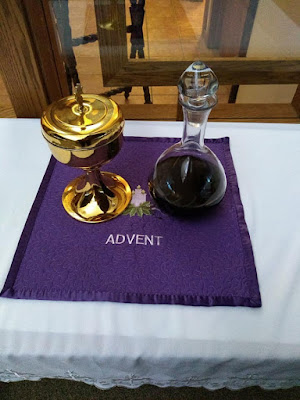 
My primary point is not repentance with regard to our abuse of the environment (as badly as this is needed). Advent is a time of joyful waiting. Joyful waiting implies preparation in anticipation of encountering the one for whom we wait. What do I mean by the second part of our passage, which begins six verses after the first part, neutralizes the first part? I mean that we are to live not only in constant readiness for the Lord's return but anticipate it eagerly as we wait for it in joyful hope. Joyful anticipation of the Lord's return requires us to be awake and alert. Living this way means living sub specie aeternatatis, or, in English, "under the aspect of eternity." As I suggested in my previous post, this means living between the already of the Lord's Incarnation and the not yet of his glorious return. This, in turn, means seeking to extend God's reign, not by power-seeking through politics but by our constant practice of prayer, fasting, and alms-giving.

In short, if we could calculate Christ's return in some kind of algorithmic way based a pre-determined convergence of natural and human-made disasters, we would not need to be vigilant. Stated this way makes it sound like, pardon the expression, "Well, duh?!" But there have been charlatans who have claimed to have made just that kind of calculation and determined the exact day. Sadly, there have been people who believed these religious grifters and altered their lives dramatically but incorrectly. Advent is the time to alter my life accordingly and correctly. This means an inward conversion that results in a changed life. I can think of no better example of what it means to alter one's life in anticipation of the Lord's return than the Christmas Eve conversion of Ebenezer Scrooge in Charles Dickens's A Christmas Carol.

Being a Christian means experiencing the transcendent in the immanent, like finding Jesus in the poor or in a small, flat, tasteless wafer and a sip of not-that-great wine. These two are connected. If you don't see Jesus in poor, downtrodden, forsaken, addicted, imprisoned or ill people, it's unlikely you'll find him in the bread and wine. After all, the most convincing proof he becomes the bread and wine is whether or not by our partaking of these we become more like him.
at December 02, 2018