Today, Roman Catholics along with many other Christians, celebrate Gaudete Sunday. In practical terms, this means today is the day we light the rose-colored candle. Why is it called Gaudete Sunday, you might ask? We call today Gaudete Sunday because Gaudete, which is Latin for “Rejoice,” is the first word of the Introit for today’s Mass. Your next question is probably, “What is an Introit?”

The word Introit is Latin. It is a combination of intro-, “to enter into,” and the Latin root word, ire, a verb meaning “to go,” “to take action.” So, the Introit means entering into an action, to start something. Think of it like the overture of a symphony, in which the all the musical themes taken up by the composer in the various movements that comprise the work are introduced.

When considering the purpose of the Introit, it is most useful to keep in mind that the word “liturgy,” which is of Greek origin, refers to the work of the people as well as work done on behalf of the people. The suffix of “liturgy,” -urgy, from whence we derive our word “urge,” refers to a deliberate action, or work. To engage in liturgy, then, means to take part in and/or be the recipient of a deliberate and beneficial effort. The work in which we engage in liturgy is not only directed to a specific end but is the primary means through which God seeks to complete creation.

A bit more down-to-earth, the Introit is a short verse that sets the tone or lays out the themes of the liturgy for a given eucharistic celebration. Our parish, like the vast majority of parishes these days, does not sing nor does the priest recite the Introit at the foot of the altar. A few churches, churches, like our Cathedral, still sing it each week.

The Introit for Mass for the Third Sunday of Advent is taken from our epistle reading, which is a passage from St. Paul’s Letter to the Philippians: “Rejoice in the Lord always; again, I say rejoice. Indeed, the Lord is near.” Or, in Latin: Gaudete in Domino semper: iterum dico, Gaudete. Dominus enim prope est.

It is vitally important that the work in which we engage during the liturgy extend beyond the end of Mass. Hence, it is highly relevant to note that our term “Mass,” from the Latin missa, refers to our being dismissed when it ends. Missa, in turn, is related to missio from whence we derive the word “mission.” It does not mean to be “dismissed” in the pejorative sense. Rather, it means being sent. This is what makes the Church, makes us, apostolic; we are those whom the Lord sends to make him present wherever we are.

Every year, the Gospel reading for the Third Sunday of Advent is about the mission of John the Baptist. Among Western Christians, the Baptist’s prominence has faded quite a bit over the centuries. Like the Blessed Virgin Mary, the Baptist plays a singular role in God's economy of salvation. It is difficult to exaggerate the importance of his one-of-a-kind ministry. He was not only or even primarily the last of the Old Testament prophets. He was the one uniquely chosen by God to be the herald, the forerunner of the Messiah. St. Luke even tells us that while the Baptist was still in the womb of his mother, Elizabeth, he was filled with the Holy Spirit and leaped at the approach of the Messiah, who was still in Mary’s womb (Luke 1:39-45). The final chapter of the Book of the Prophet Malachi, which is the final book of the Old Testament contains a prophecy:

Now I am sending to you Elijah the prophet, Before the day of the LORD comes, the great and terrible day; He will turn the heart of fathers to their sons, and the heart of sons to their fathers (Mal 3:23-24) 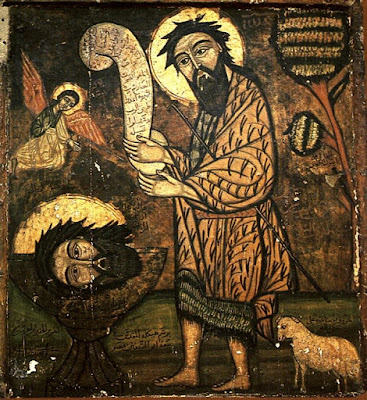 Speaking of the Baptist, Jesus himself said:

among those born of women there has been none greater than John the Baptist… All the prophets and the law prophesied up to the time of John. And if you are willing to accept it, he is Elijah, the one who is to come (Matt 11:11.13-15)

Of course, Elijah, who was taken up into heaven in a chariot of fire (see 2 Kings 2:8-14), was greatest of the strictly Old Testament prophets.

I admit that what I have said so far might be dismissed as academic; “Interesting, but so what?” This brings us to the question that constitutes the heart of today’s readings, especially our Gospel text: “What then should we do?” (Luke 3:10). The “crowds” asked this question after the Baptist, who began by denouncing them as a “brood of vipers,” challenged them to repent and “Produce good fruits as evidence of [their] repentance,” lest they “be cut down and thrown into the fire” (See Luke 3:7-9).

Hearkening back to extending our work of liturgy beyond the Mass, it is useful to note that the crowds do not ask the Baptist “What shall we believe?” They certainly did not pose the question that in all honesty we are sometimes tempted to ask: “How shall we interpret John’s words in such a way that we may maintain our comfort while our neighbors suffer?” (See Austin Crenshaw Shelley, “December 16, Advent 3C, (Luke 3:7-18)”). As Austin Shelley pointed out, the Baptist’s reply to the question of the crowds could not be clearer: “Repentance has to do with ethics, with action, with the Holy Spirit’s compelling us to be God’s hands and feet in the world—with attention to the needs of others rather than preoccupation with our own salvation” (Ibid).

In our reading from Paul’s Letter to the Philippians, in which he urges them to rejoice always, the apostle points to one sure source of joy, and so of rejoicing: “Your kindness should be known to all” (Phil 4:5a). The Greek word translated into English as “kindness” is epieikés. Literally, epieikés means “true equity,” or “true justice.” In other words, Paul is urging them to be heralds of Christ by enacting “justice beyond ordinary justice.” I can only conceive of justice beyond ordinary justice as mercy and compassion.

The psychological distress of American #Christmas,” tweeted the satirical but often insightful Werner Twertzog last week, “is the result of unsustainable cognitive dissonance regarding its overt claims and its covert purposes” (See Werner Twertzog, 14 December 2018. 8:18 AM). In other words, there often seems to be a disconnection between who we celebrate and how we go about celebrating. Our giving in to the temptation to leap over Advent in our rush to Christmas is one sure sign of this disconnection.

The people asked the prophet, “What shall we do?” It’s easy to imagine the answer is complicated. But in this instance, the answer is quite straightforward. Consider the Baptist’s first response, which applies to everyone and not only to unique situations he addresses with regard to tax collectors and soldiers, whose interest in his message serves to highlight the power of John’s preaching: “Whoever has two tunics should share with the person who has none. And whoever has food should do likewise” (Luke 3:11). These are the works in which, as disciples of the One whose herald the Baptist was and whose heralds we are called to be by virtue of our Baptism, we should be engaged. Such works are the fruits produced by anyone who is genuinely repentant. It is by engaging in these works that we extend the liturgy. By going forth to make Christ present to those with whom we find ourselves, especially helping those in need, they can rejoice that the Lord is near.
at December 16, 2018