For the First Sunday of Advent I want to focus briefly, not on the readings for Mass, but on the reading for another of the Church's liturgies: Morning Prayer. More traditionally, Morning Prayer is called by its Latin name: Lauds. I would point out that the name Lauds is derived from the last three Psalms (Psalms 148, 149, 150), together known and "the Laudate Psalms." Before the revision of what is now known as the Liturgy of the Hours after the Second Vatican Council, these three Psalms were prayed each day during the morning office. Beyond that, in all three of these Psalms the Latin word laudate is often repeated. Of course, even in English, to "laud" is to praise. Over time, the entire office came to be known as Lauds.

Given that the morning office no longer features the Laudete Psalms each day, apart from carrying the name over for the sake of continuity, it really makes no sense to call it "Lauds." So, we properly call it "Morning Prayer." Now that my didactic itch has been scratched, I want to move onto Advent and the reading for Morning Prayer for the First Sunday of Advent.

The reading for Morning Prayer at the dawn of the first full day of Advent, a season that calls us to repent as we wait in joyful hope for the coming of our Savior, Jesus Christ, is taken from St. Paul's Letter to the Romans. Specifically, Romans 13:11-12 (the translation from the Liturgy of Hours differs from that found in the New American Bible):

It is now the hour for you to wake from sleep, for our salvation is closer than when we first accepted the faith. The night is far spent; the day draws near. Let us cast off deeds of darkness and put on the armor of light

Repenting means to wake up, to return not only to God but to yourself and to reality. This requires asking yourself some serious questions about the meaning of life and how you live your own life in light of its meaning. You see, faith means more than just believing in some inchoate way. To have faith means to step out, to take action. Faith is my response to God's loving initiative towards me. While faith is a gift from God, the surest sign one has faith, as James suggests (likely contra some of the excesses or incompleteness James found in some of Paul's preaching and writing), is shown through works of righteousness. Chief among righteous works is caring from the poor, the outcast, the person who probably makes you uncomfortable. What else could Paul be referring to in his exhortation to "put on the armor of light"? Well, since it's Paul, he's referring to a lot of things but he certainly includes caring for each other and those in need. Too often we limit morality to "personal" morality, by which we usually mean things like not swearing, not drinking to excess, if at all, comporting ourselves circumspectly in matters pertaining to sex, and so on. I reject none of this, but these do not come before the requirement to love my neighbor in concrete ways. Indeed, what Advent calls us to, again, is to practice the three fundamental spiritual disciplines: prayer, fasting, and alms-giving, the latter of which can also be called selfless service to others. 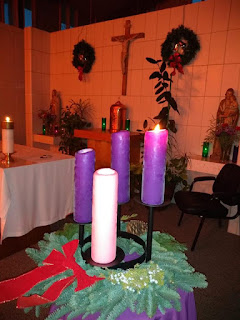 Taken last night in the chapel of St Olaf Parish Bountiful, Utah, as I began First Vespers- the first liturgy of the new liturgical year


As to "deeds of darkness," each of us knows our own heart. We are all too aware of what often lurks there. We need to expose the darkness of our hearts to the light of day. Light disperses darkness automatically. A good place to start is by going to confession. I would urge you, as you examine your conscience, to consider sins of omission and not just those of commission. Since Advent begins as a penitential season, the Sacrament of Penance is usually made more available towards the middle of the season with Advent Penance services and the like. With the Third Sunday of Advent, on which we hear the Baptist's call to repent, Advent takes a turn from preparing for Christ's return in glory by extending God's reign, which requires us to live as if God's kingdom is already fully realized (it should be fully realized in us), or the "not yet," to "the already" of his Incarnation. Even our turn from the not yet to the already is a plea for Christ to be born anew, or maybe for the first time, in us by the power of the Holy Spirit so that we might incarnate him, each of us an alter Christus, another Christ. Becoming an alter Christus is what each of us was baptized and confirmed to be. Communion and confession, then, become means of grace for each of us to be transformed into the image of Christ, together becoming Corpus Christi, the Body of Christ.

In the magnificent Prologue to St. John's Gospel, the inspired author states: "through him [the Incarnate Word] was life, and this life was the light of the human race; the light shines in the darkness, and the darkness has not overcome it" (John 1:4-5). As Christ's followers, made the children of the Father by rebirth, we are light of the world:

You are the light of the world. A city set on a mountain cannot be hidden. Nor do they light a lamp and then put it under a bushel basket; it is set on a lampstand, where it gives light to all in the house. Just so, your light must shine before others, that they may see your good deeds and glorify your heavenly Father (Matt 5:14-16)

And so, as we begin a new year of grace, a new year in which we wait in joyful hope and eager anticipation for the Lord's return, let us repent, casting aside deeds of darkness and putting on the armor of light. In anticipation of the establishment of God's never-ending reign, let's seek to establish this kingdom each day in all we do, seeking to make Christ present wherever we are. In addition to making us all one with him and with each other, which unity should include everyone, Christ comes to dwell in us so that we can make him present wherever we go.

Perhaps the best thing about Advent is that, unlike Christmas, it is not a sentimental season, but one that beautifully enables us to engage reality to the full as we await the fulfillment of reality. I will end by turning to our Sunday readings. As befits a post in which the Liturgy of Hours, which mostly consists of praying them, I turn to our Psalm (25):

Your ways, O LORD, make known to me;
teach me your paths,
Guide me in your truth and teach me,
for you are God my savior,
and for you I wait all the day