Feast of Our Lady of Guadalupe

It is right at fitting that over the course of Advent we celebrate two great Marian feasts. Just last week we celebrated the Solemnity of the Immaculate Conception and today we celebrate the Feast of Our Lady of Guadalupe. For us, as inhabitants of the continent of North America and of the country the United States of America, these are important observances. The Blessed Virgin Mary, under the title of Our Lady of Guadalupe, is patroness of all the Americas. Under the title Immaculate Conception, she is the patroness of these United States of America. I do not call her “Our Lady of the Immaculate Conception,” but only "the Immaculate Conception” because this is how she revealed her identity to St Bernadette in Lourdes, France in 1858, after the young peasant girl, at the behest of her pastor and the local authorities, had been imploring the one she called, in her local dialect, un petito damizelo, which in English is “a small young lady,” to reveal who she was.

Of course, as Our Lady of Guadalupe she revealed herself centuries before her appearances in Lourdes to another lowly person, an indigenous man, St Juan Diego. During the time he was favored with the appearances of Our Lady, Juan Diego was a catechumen, a member of what we today call RCIA. In other words, he was receiving instruction to be baptized. The first apparition he experienced was while walking from his home to the Franciscan mission where he was receiving instruction. According to the sources we have, the Blessed Virgin appeared to Juan five times. It was in her very first appearance that she requested, through Juan Diego, that the bishop build a chapel in her honor. The bishop Juan Zumárraga, while never seriously doubting the witness of Juan Diego, asked for a sign to authenticate what he was being told.

It was during her fourth apparition that Our Lady provided the sign requested by the bishop. This appearance took place under interesting circumstances. Juan Diego was determined to miss his appointment with Our Lady because his uncle had fallen ill and was in danger of death. As a result of his uncle’s illness, he set out to retrieve a priest to hear his uncle’s confession, anoint him and give him communion. In order not to be delayed by his appointed meeting with the Virgin, Juan chose another route, one that avoided the place he was to meet her. But she appeared along his alternate route and asked him where he was going. After Juan explained, the Virgin gently chided him for not having had recourse to her, using her most famous words to him, the words that today are etched over the main entrance to the Basilica of Our Lady of Guadalupe in Mexico City: ¿No estoy yo aqui, que soy tu madre? (Am I not here, I who am your mother?).

The Blessed Virgin assured Juan Diego that his uncle was now completely healed. She then instructed him to climb a nearby hill and collect flowers growing there. Heeding her instructions, Juan found many flowers growing out of season on a rocky outcrop of the hill where normally only cactus and scrub brush grew. Using his open mantle, or tilma, as a sack (with the ends tied around his neck) he returned to the Virgin; she re-arranged the flowers in his mantle and told him to take them to the bishop. On gaining admission to the bishop later that day, Juan Diego opened his mantle, the flowers poured to the floor, and the bishop saw that the flowers had left on the mantle an imprint of the Virgin's image which he immediately venerated. Juan’s tilma is with image of Our Lady of Guadalupe can miraculously still be seen today. 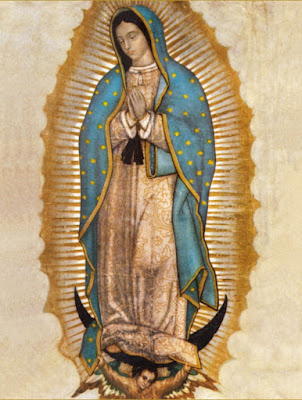 Our first reading, taken from the last book of the Bible- Revelation- gives us much of the imagery we find in the image of Our Lady of Guadalupe. This shows us that the Blessed Virgin is the one who gave birth to God’s son, who took away the curse of our first parents.

All what was predicted way back after the fall began to be fulfilled in a cave in the little town of Bethlehem, where Miriam of Nazareth gave birth to her son, who she named, in obedience to what was revealed to her by the Archangel Gabriel, Jesus, which name means “God saves.” My dear friends, as our Blessed Mother herself, along with Sts Juan Diego and Bernadette Soubirous, shows us, God brings about his purposes in the world through the lowly and humble. Our Savior’s birth is the most perfect example of what St Paul clearly wrote about in his First Letter to the Corinthians: “God chose the foolish of the world to shame the wise, and God chose the weak of the world to shame the strong and God chose the lowly and despised of the world, those who count for nothing, to reduce to nothing those who are something, so that no human being might boast before God” (1:27-29). (1:27-29).

In thinking of the flowers the Virgin used to imprint her beautiful image on Juan’s mantle, it’s important to note that our word “Rosary” comes from the Latin word rosarium. A rosarium is a garland of roses. It’s vitally important to pray the Rosary often, preferably daily. Offering our prayers and petitions and those of people who have asked for our prayers to God through our Blessed Mother. So, don’t ever hesitate to ask the Virgin Mary to intercede for you and/or for others. She constantly says to us what she said to the humble man, Juan Diego centuries ago: ¿No estoy yo aqui, que soy tu madre?
at December 12, 2018