On the Feast of Stephen

My middle name is Stephen, after my father, whose first name was Stephen. When I was baptized and confirmed at age 24, I did not feel inclined to choose the name of another saint. This was before I ever had an inkling I would discern my call to be a deacon. Since I renamed my weblog in 2007, which is when I started "blogging" in earnest, St Stephen has been the patron of this cyber space. So, today is a very special day to me.

On second day of Christmas, the Church observes the Feast of St Stephen. Along with six other men, who the Acts of the Apostles tell us were "filled with the Spirit" (Acts 6:3), Stephen was chosen to serve the earliest Christian community by ensuring an equal distribution of the Church's goods. Of particular concern were the complaints of the Greek-speaking widows that they were being shorted in the daily distribution of food. It was to deal with this potential rift that the community, not merely the apostles, chose seven men to ensure a fair distribution of Church's commonly held goods.

And so, for the purpose of ensuring the fair daily distribution of food, "Stephen, a man filled with faith and the holy Spirit, also Philip, Prochorus, Nicanor, Timon, Parmenas, and Nicholas of Antioch, a convert to Judaism" (Acts 6:5), were then set apart, one might say "ordained," by the apostles laying hands on them. In reality, it is anachronistic to use the term "ordained" in the context of the primitive Church. While these men, going back at least to St Irenaeus, have been held to be the Church's first deacons and while the office of deacon was instituted early on in Church (possibly prior to the order of presbyter), the seven men are never referred to as deacons in the relevant passage: Acts 6:1-7. Their not being referred to as deacons, or even being said to engage in diaconal service in this passage is made even more interesting by the fact that the Greek word diakonia is used in this passage four times: three times as a noun and once in verb form.

The next thing we read about in Acts is Stephen, "filled with grace and power," preaching the Gospel (Acts 6:8-15 and Acts 7:1-3). His preaching about Jesus Christ drew the attention of a zealous Pharisee: Saul of Tarsus. At Saul's instigation, a whipped-up Jewish mob stoned Stephen to death (see Acts 7:54-60). All of this is interesting biblical background but it is important to try to discover what it might mean.

A friend, Fr Peter Nguyen, SJ, who teaches Theology at Creighton University in Nebraska, posted a homily by his fellow Jesuit, Alfred Delp. Fr Delp delivered this homily on today's feast back in 1941. Delp was arrested, imprisoned, and ultimately killed by the National Socialist government for opposing them by belonging to a resistance group known as the "Kreisau Circle" as well as for preaching against the Nazi's evil ideology. He was executed in February 1945. I think Fr Delp's homily, especially when coupled with his own witness, cuts to the meaning of today's feast in a powerful way.

I am wholly indebted to Fr Peter for bringing Fr Delp's homily to my attention. I am equally indebted to him for "showing me" Peter Webb's amazing painting of Stephen's stoning. 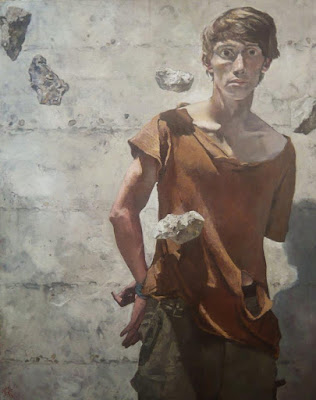 The Stoning of Stephen, Peter Webb

Today’s feast destroys two illusions in the midst of the Christmas experience. It rips up the dream of an idyllic Bethlehem. Christmas is not about lingering happily in that magical hour of that miracle. This God chooses to descend to us and to encounter our difficult questions. Paul calls this the kenosis of the Lord, the self-emptying, the self-giving, self-surrender, the descent. Christmas is this decision of God’s devotion to us. And so, the Feast of Christmas always confronts us with the question of the meaning of this Divine devotion.

The red robes, which I wear today in the start of the Christmas holiday, points to it: the birth of Christ conveys more than a happy memory; it communicates something that speaks to the heart, to the soul, to the very interiority of one’s decision-making.

From this time onward, one knows that the Lord is there, and one has experienced Him in a thousand miracles again and again and that at the same time one knows, the Lord is drawn into our perdition, he is there in our loneliness. The Lord neither sends us whom he has interiorly touched beyond catastrophes nor sends us into storms and lets us sink in them.

And that is the miracle that comes up repeatedly throughout the ages: that one can bear catastrophes and deal with it, instead of avoiding them.

I follow Melissa Florer-Bixler, who pastors a Mennonite community in Raleigh, North Carolina, on Twitter. Yesterday, commenting on the spectacle many churches attempt to put on at Christmas, she tweeted: "If your goal is to get people to show again because of your slick production values imagine the distressing sense of bait and switch when you tell them they are called to die."
at December 26, 2018