To Narnia and the north- journeying with a Presence

Currently I am reading through C.S. Lewis' The Chronicles of Narnia with my seven year-old son. Not having been raised in any sort of orthodox Christian milieu, this is my first time reading through the Chronicles in their wonderful entirety. Of course, I have seen the films, which strike me as good adaptations of Lewis' book, but as a lifelong reader, watching the movie is never sufficient. Right now we are finishing A Horse and His Boy. I am grateful to enter these tales at 47. It is a grace and a blessing, even if it results in blog posts that may leave some readers saying "Duh!" out loud.

So far, I think the figure of Aslan is most profound in A Horse and His Boy. Last evening we read about Shasta's experience, which occurred after he, Aravis, Bree, and Hwin all escaped Tashbaan and began heading in earnest towards Narnia and the north. The malevolent Prince Rabadash of Tashbaan and his small army are right their heels. After rescuing Aravis and Hwin from the attack of a lion (an attack that left Aravis wounded and bleeding and Bree- the proud warhorse- ashamed for running away) and leading them safely to the refuge of the hermit, Shasta is urged by the hermit to proceed further into Archenland to warn the king about the imminent attack of Rabadash and his army. Before he makes it to Anvard, the capital of Archenland, Shasta encounters King Lune, who is hunting with a party of Archenland nobility. He warns the king, is given a horse, and proceeds on with the party to Anvard. Not being much of a horseman, Shasta falls behind and becomes lost. He comes to a fork in the road and does not know which road to take. Hearing the approach of Rabadash and his army, the boy hides. Seeing which way the invading army went, Shasta chooses the other way, figuring it was safest, that "all roads lead somewhere," and with the knowledge he had done his duty warning the ruler of Archenland about the impending attack.

Knowing he is lost, Shasta becomes distraught and starts feeling sorry for himself, until he senses the presence of something large and imposing beside him. After a few moments of terror, Shasta speaks to the presence. After a brief exchange, the one present to the poor boy says, "Tell me your sorrows." Shasta quickly recounts all of his misfortunes since running away from the poor fisherman who raised him without much love. In response to Shasta's conclusion that he is most unfortunate, the presence says, "I do not call you unfortunate." Replying to Shasta's complaint that that several times during his journey he was beset lions, the presence tells the boy, "There was only one lion." At this point, if there was any doubt to the reader of the Chronicles, it is Aslan who walks beside Shasta. The boy asks, "How do you know [there was only one lion]?" Aslan replies, "I was the lion." 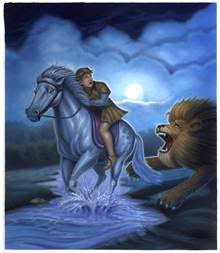 Lewis here gives a brilliant account of how Christ works in our lives:


I was the lion who forced you to join with Aravis. I was the cat who comforted you you among the houses of the dead. I was the lion who drove the jackals from you while you slept. I was the lion who gave the Horses the new strength of fear for the last mile so that you should reach King Lune in time. And I was the lion you do not remember who pushed the boat in which you lay, a child near death, so that it came to shore where a man sat, wakeful at midnight, to receive you

Next Shasta asks a question that made me choke up- "Then it was you who wounded Aravis?" Aslan admits it, saying, "It was I." Shasta asks the inevitable: "But what for?"

"Child," Aslan begins, "I am telling you your story, not hers. I tell no one any story but his own." This prompts Shasta to inquire, "Who are you?" His answer? "Myself," repeated three times. After this the boy "was no longer afraid that the Voice belonged to something that would eat him, nor that it was the voice of a ghost. But a new and different sort of trembling came over him. Yet he felt glad too." Eventually, Shasta sees, "pacing beside him, taller than a horse, a Lion... It was from the Lion that the light came. No one ever saw anything more terrible or beautiful... after one glance at the Lion's face he slipped out of the saddle and fell at its feet. He couldn't say anything but then he didn't want to say anything, and he knew he needn't say anything."

Email ThisBlogThis!Share to TwitterShare to FacebookShare to Pinterest
Labels: discipleship, I believe, Reflections and Ruminations