Jesus wants us to decide

In our Gospel for this Third Sunday in Ordinary Time, the sacred author of St. Luke's Gospel tells us that it was Jesus' custom to attend synagogue on the sabbath day. We hear about this in the second part of today's Gospel, which skips from Luke's prologue at the beginning of the first chapter to part-way through the fourth chapter. According to Luke's chronology, this event occurs shortly after the beginning of Jesus' public ministry, that is, after the events of His conception, His birth, the incident in the Temple when He was 12, His growing up under the tutelage of Mary and Joseph, His baptism by John, his forty days and nights in the desert, and even a short period of ministry elsewhere in Galilee. In other words, Jesus returns home, thus lending substance to what Thomas Wolfe asserted in the title of his novel You Can't Go Home Again. It is from this episode that we derive another cliché, one that comes a little bit later, after the final words of our reading today, a cliché that is an axiom: "Amen, I say to you, no prophet is accepted in his own native place."

In most modern English translations of the sacred Scriptures the heading of this section of Luke's Gospel is something like the one used in the New American Bible: The Rejection at Nazareth. What Jesus read from the scroll of the prophet Isaiah is a messianic prophecy:


The Spirit of the Lord is upon me,
because he has anointed me
to bring glad tidings to the poor.
He has sent me to proclaim liberty to captives
and recovery of sight to the blind,
to let the oppressed go free,
and to proclaim a year acceptable to the Lord 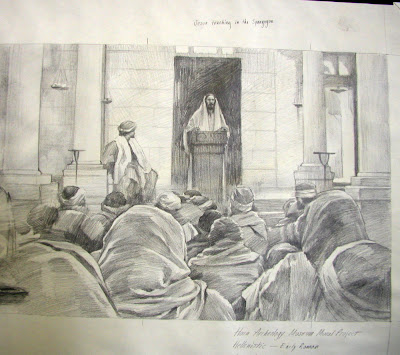 He proclaims Himself "anointed," which is what "Messiah" means. He also sets forth clearly His messianic mission, which is not to rally Israel and militarily defeat the Roman occupiers, or to re-establish and expand the earthly kingdom of Israel as a new King David. No! He is anointed to do the things He had already been doing at that point prior to His arrival back home in Nazareth.

This is one of those passages that makes it clear Jesus understood His mission and His identity. Like the people gathered in the synagogue at Nazareth more than 2,000 years ago, His words are meant to force us to a decision, to choose among the only possible alternatives, which C.S. Lewis laid out as "liar, lunatic, or Lord." Lewis insisted that Jesus did this deliberately. His insistence is born out by St. Paul, who wrote in his First Letter to the Corinthians,


since in the wisdom of God the world did not come to know God through wisdom, it was the will of God through the foolishness of the proclamation to save those who have faith. For Jews demand signs and Greeks look for wisdom, but we proclaim Christ crucified, a stumbling block to Jews and foolishness to Gentiles (1 Cor. 1:21-23)

It seems to me that there is a connection between participating in Jesus' messianic mission, which He seeks to carry on in and through us, and being able to profess Him as Lord.
at January 27, 2013