Solemnity of the Blessed Virgin Mary, the Mother of God

Each year on this Solemnity the Church also observes the World Day of Peace. It has become customary for the Roman Pontiff to promulgate a papal message for this day. In his message, the Pope addresses the on-going need for the Church and Her members to be a force for peace and human solidarity in the world and extends this call to adherents of other faiths and all women and men of goodwill.


This year, Pope Benedict XVI begins his message by pointing to the hope many of us express at the beginning of a New Year: "Each New Year brings the expectation of a better world. In light of this, I ask God, the Father of humanity, to grant us concord and peace, so that the aspirations of all for a happy and prosperous life may be achieved." This hope is shared by many people throughout the world and is not limited to believers, or adherents to any specific faith, indeed it extends to people who claim no faith.

In his 2013 message, the Holy Father touches on many things. Of those things I want to focus briefly on what he has to say about economics and economic development, which remarks flow from his latest encyclical Caritas in veritate.

In the first section, the Pope notes: "It is alarming to see hotbeds of tension and conflict caused by growing instances of inequality between rich and poor, by the prevalence of a selfish and individualistic mindset which also finds expression in an unregulated financial capitalism. In addition to the varied forms of terrorism and international crime, peace is also endangered by those forms of fundamentalism and fanaticism which distort the true nature of religion, which is called to foster fellowship and reconciliation among people."

The Holy Father dedicates the fifth section, entitled Building the good of peace through a new model of development and economics, to this theme. In this section he takes aim at "The predominant model of recent decades," which "called for seeking maximum profit and consumption, on the basis of an individualistic and selfish mindset, aimed at considering individuals solely in terms of their ability to meet the demands of competitiveness." In addition to not being sustainable, such a model denigrates our common humanity.

He goes on to note that "true and lasting success is attained through the gift of ourselves, our intellectual abilities and our entrepreneurial skills, since a 'liveable' or truly human economic development requires the principle of gratuitousness as an expression of fraternity and the logic of gift. Concretely, in economic activity, peacemakers are those who establish bonds of fairness and reciprocity with their colleagues, workers, clients and consumers. They engage in economic activity for the sake of the common good and they experience this commitment as something transcending their self-interest, for the benefit of present and future generations. Thus they work not only for themselves, but also to ensure for others a future and a dignified employment." In short, while success is not to be eschewed, it cannot be calculated solely on the basis of profit. 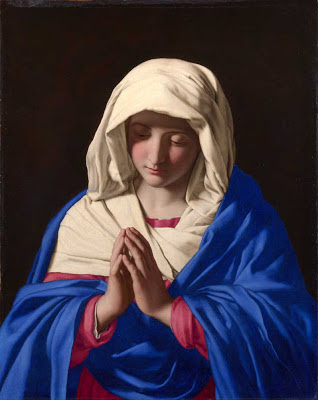 
The Blessed Virgin Mary, Mother of God, according to many Fathers of the Church, "was the receiver of God's word par excellence. She welcomed the Word in her mind before the Word became flesh in her body. In those secret months of cherishing and nurturing the Word, she became the model of the contemplative Church. Her words at the Annunciation might well be ours as we begin lectio [divina]:" "Behold, I am the handmaid of the Lord. May it be done to me according to your word" (Sacred Reading: The Ancient Art of Lectio Divina, Michael Casey, O.C.S.O.; Luke 1:38).

Stefania, a friend of mine posted this on Facebook yesterday morning: "Nulla di ciò che ci è donato finisce, ma il cuore ha una sete insaziabile di un nuovo inizio. Sempre questo povero cuore attende un nuovo inizio. Per questo nel Cielo si leva la luna e sorge il sole, per calmare la sete di chi sulla strada attende." Which, according to my poor translation, says, "Nothing that is given to us is over, but the heart has an insatiable thirst for a new beginning. Again this poor heart is waiting for a new beginning. In the heavens the moon and the sun rise, to quench the thirst of those for the road ahead."

It is my fervent prayer that this New Year is a new beginning for all hearts wise enough to recognize their poverty. Happy New Year to one and all.
at January 01, 2013