Chesterton on the intolerance of friendship

At its best, blogging is an intermediate form of expression. When done well it doesn't really descend to the banality and near cultural, historical, philosophical illiteracy of contemporary journalism, but neither is it an academic exercise, nor an on-line personal diary (David Letterman's old diary, "I love eggs. Boy do I love eggs"). At least for me, when done well blogging is a journal of ideas, a sharing of interests and passions. In my case, not new ideas, but consideration and re-consideration of enduring ideas (I make no claim either to being very original or to have mastered the art of blogging). This conception has the advantage of allowing me to look far afield, from what I am reading, movies I see, music I hear, and even public (rarely private, then with appropriate caution and even permission) discussions I engage in with friends near and far. As both of my longtime readers know, I particularly enjoy exploring provocative ideas and taking on lazy assumptions in the conviction that authentic faith can never lead us to the kind of smug certainty many people (myself included) often seem to want.

With that lengthy wind-up, first thing this morning I read a very insightful review of Ian Ker's recent G.K. Chesterton: A Biography by Ralph Wood of Baylor University in Books and Culture. Rather than review Wood's review, I want to stick to the topic of tolerance, namely its current tyranny.

Before tackling tolerance head-on, it is useful to note, as Wood does, that part of the invective Christopher Hitchens hurled at Chesterton, whom he read on his deathbed and whose article on Gilbert Keith, "The Reactionary," appeared in The Atlantic some months after his death on 15 December 2011, consisted of this: "when [Chesterton] was posing as a theologian, he was doing little more than ventriloquizing John Henry Newman at his most 'dogmatic.'" It is also helpful to know that Ker wrote John Henry Newman: A Biography. All of this puts the reader of both biographies in a position to judge whether Hitchens' criticism is accurate. 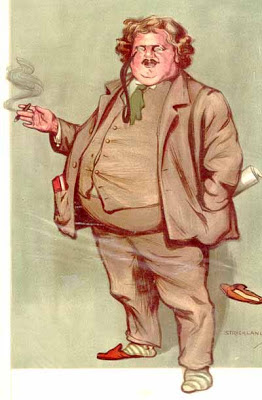 There can be no doubt that Chesterton, who traveled the same road as Newman from Canterbury to Rome, read Newman and was influenced by the great man. Wallace highlights Chesterton's indebtedness to Newman for his understanding of what I will call the dialectical permanence of Christian dogma and doctrine. Chesterton held that human beings are by nature dogmatic (among men there is perhaps none more dogmatic than the atheist or Darwinian evolutionist- often the same person, but not always).  As Chesterton helpfully noticed, "Trees have no dogmas" and "Turnips are singularly broad-minded." This prompts Wallace to assert that "Chesterton's high estimate of dogma gives him a low regard for tolerance." It is this insight that leads me to the heart of the matter.

Wood is correct to alleviate the concern Chesterton's rejection of "tolerance" by pointing to some contemporary thinkers who notice the same things, but whose critiques are less pithy and more academic, namely Michael Walzer and Stephen Carter. "Tolerance," Wallace writes, "keeps an allegedly neutral peace when it is in fact an exercise of force." He goes on to cite Carter's insistence that "The language of tolerance is the language of power." Wallace unpacks this sentence: "The tolerator grants liberty to the tolerated only when the latter behaves tolerantly, i.e., in accord with the tolerator's notion of what is safe and appropriate and acceptable." I cannot help but apply this to the current attempt to redefine marriage in many Western societies.

For Chesterton the response to the tyranny of tolerance is a form of intolerance, it's called friendship. According to Wallace, this point is made in very decent literary fashion by Chesterton in his novel The Ball and the Cross. This story features two enemies, who bear some resemblance to Chesterton and Hitchens (I think of Hitchens' encounter with Msgr. Albacete), who, to use Wallace's words, "learn not to tolerate each other but to become the most hospitable of friends." It's a sad commentary that so many of us find that answer so surprising. Of course, when overstated and/or exaggerated, this, too, can become a banality, a cliché. Such resolution requires both good faith and genuine affection. I would also add that even friendship that arises from diametrical opposition, while not seeking to avoid or evade that opposition (it creates a space for honest expession), also calls for a kind of loyalty born of affection that is a requirement of any friendship, at least for me.

Email ThisBlogThis!Share to TwitterShare to FacebookShare to Pinterest
Labels: Cultural, Reflections and Ruminations