In past years I have posted a lot about various saints on their feasts and memorials. It is a practice I have gotten away from for no really acceptable reason. But as I was preparing my homily last week, which was on the unique role of the Blessed Virgin Mary in the oikonomia of salvation, I was once again struck by how necessary it is to grasp that the Church is communio sanctorum, that is, the communion of holy people and things, a communion that transcends time and space. Veneration of the saints has been part and parcel of Christianity if not from the very beginning, then since shortly after the beginning, from at least the martyrdom of my beloved St. Stephen onward.

An important part of venerating the saints is appealing to them to pray for us, to intercede for us. While this is analogous to asking our living Christian brothers and sisters to pray for us, it is different in at least one important aspect, namely believing that the saints are already in the presence of God, caught up in the beatific vision, which makes their help much more efficacious.

The convergence of the day the United States celebrates the human rights legacy of Dr. Martin Luther, Jr. this year, the fact that it is the day of Barack Obama's second inauguration as president of the United States, and the day the Church annually observes the Memorial of St. Agnes of Rome, Virgin and Martyr, strikes me as significant. 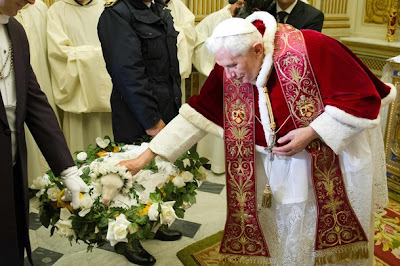 
The twenty-first of January has been the date of St. Agnes' feast since the fourth century. Hers is a feast so ancient, dating for certain from shortly after the first ecumenical council (the Council of Nicea)- likely from before- that she is celebrated today among Christians both East and West. She is believed to have been martyred in Rome during the persecution of the emperor Diocletian around AD 304. She was only 12 or 13 at the time of her death. For many centuries the symbol used to represent St. Agnes has been a lamb, a sign of her innocence. It is on this day that the Roman Pontiff solemnly blesses two lambs. It is from the wool of these consecrated animals that pallia given (usually given ceremonially and in person these days) by the Holy Father to newly named archbishops are made.

Like many great saints, such as one my two patrons, St. Martin of Tours, who formerly garnered wide and deep veneration among the Christian faithful, the cultus of St. Agnes has waned. I am convinced that no true renewal of the faith will occur without restoring the saints to their rightful place. As Fr. Tonino Lasconi, a parish priest and author of numerous volumes on the renewal of catechesis in Italy, observed, "Without the saints, the faith vanishes." Among the reasons I favor Pope Benedict's restoration of the Extraordinary Form is the profound veneration of the saints it fosters. In the hoped-for cross-pollinization between the Ordinary and the Extraordinary forms of the Sacred Liturgy, moving towards a synthesis and further renewal, a unique time in history when the Roman Church has two rites, one enrichment I pray for is the restoration of the saints, ancient, modern, and in between, to their rightful place in liturgy and the devotional life of the faithful.

Given where we're at societally and where we seemed to be headed, martyria- which means "witness"- will remain what many Christians are called to, especially in light of the ever-increasing encroachment of the modern state and the reduction of religious liberty to the mere freedom to worship (i.e., what we do in Church on Sunday), an encroachment that has to be resisted peacefully, but no less vigorously.