Far from being hopeless, the recognition of the fundamental importance of marriage for society, the importance of which is recognized by many people who are homosexual, along with no small number of atheists and agnostics, runs broader and deeper than many think. There are growing signs of this both here in the U.S. and abroad, including Europe, where previously moribund populations seem to be waking up to the civilizational suicide being inflicted on them by the European Union in concert with the governments of many nation-states. The two European countries where these sparks have ignited into a flame are the United Kingdom (i.e., the country formerly known as Great Britain) and France.

In addition to the arguments expressed in an important essay opposing "same-sex marriage" by the Chief Rabbi of France, Gilles Bernheim, whom the Holy Father cited in his Christmas speech to members of the Roman Curia, Rabbi Riccardo Di Segni, Chief Rabbi of Rome, earlier expressed his well-argued opposition. Rabbi Di Segni's article was posted in translation recently on Sandro Magister's indispensable Chiesa blog. In an earlier article, while not providing a translation, Magister also provided a link to the essay by Chief Rabbi Bernheim- Mariage homosexuel, homoparentalité et adoption.

Last Sunday, 13 January, a large demonstration took place in the streets of Paris. While the official police estimate put the number of protestors at around 340,000, other credible sources reported that it was much higher, perhaps as high as 1.3 million people. The demonstration was called in protest to a law proposed by French president, François Hollande, to radically redefine marriage. In the words of one commentator, J.C. Von Krempach, writing for the blog Turtle Bay and Beyond: Intenational Law, Policy, and Institutions, "The turnout was overwhelming and dwarfed even the most optimistic forecasts... the number of demonstrators who, despite the biting cold, came to Paris last Sunday to rally against the socialist-led government’s plans to legislate for same-sex 'marriages' ... it now turns out that the number of protesters amounted to 1.3 million rather than the official number of 340.000." 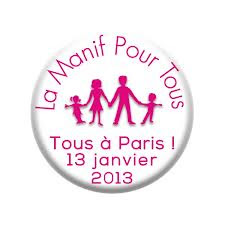 In the days prior to the protest, President Hollande met with France's religious leaders, including Chief Rabbi Bernheim. In a move typical of the passive-aggressive style of radical governance exhibited by such politicians, "Hollande did not comment directly on the concerns expressed by the religious leaders about the draft law."

One of the hallmarks of French opposition to their government's attempt to radically redefine marriage is noted by Krempach:


The reality is: in France, one of the most secularized countries on this planet’s most secularized continent, opposition against same-sex "marriage" is not limited to religious believers, be they Catholic or Muslim [or Jew], but it comes from the heart of society, including many atheists and secularists, supporters of President Hollande’s Socialist Party, and even many homosexuals who say that they, having never wanted to marry and adopt children, do not feel represented by the President’s radical social agenda

It bears noting that Hollande was the longtime partner of fellow Socialist Party leader Ségolène Royal, who was the unsuccessful Socialist candidate for president in 2007, losing to Sarkozy, whom Hollande beat last year. The two have four children together. As stated in one article, "They never married, considering it too 'bourgeois', but they often posed around the breakfast table with their four children." Predictably, they are no longer together. My only point in noting that is simply to show that the president proposing this radical redefinition of marriage does not see marriage as an institution of any importance, but as a relic of a bourgeois past, one that, in his early 1970s view, society needs to move beyond.

Sylviane Agacinski-Jospin, the wife of former Socialist Prime Minister Lionel Jospin, who is often described as a philosopher and feminist and author of a book entitled Sexual Politics, is one of the more prominent opponents of Hollande's attempt to redefine marriage.

Jospin himself is on record as opposing such a redefinition. The former PM is a Reformed Protestant.
at January 18, 2013