"Do whatever has to be done again today"

As one or two of my longtime readers may be aware, I was a longtime reader and peripheral acquaintance of the late Michael Spencer, more popularly known as the Internetmonk, or IMonk. Michael succumbed to cancer in April 2010. His legacy is still carried on very well by Chaplain Mike and Jeff Dunn over at InternetMonk: Continuing Michael Spencer's Legacy of Jesus-Shaped Spirituality. My most notable interactions with Michael were his comment on my post, "When we in our weakness believed we were strong"(Michael Card). . .words from bald guys, in which I mentioned him and his subsequent writing about being mentioned in my post (what he liked was that I mentioned him along with Thomas Merton), and our on-going discussion about the place of the Creed in Christian worship, more specifically worship in an imagined "ideal" Church (I insisted it had to be a part, he was not so sure.)

Right now, as part of my early morning prayer/devotional time (something I find less and less able to live without- as I grow older I can no longer pretend that I am not a need), I am reading Michael's one and only book, published a few months after his death: Mere Churchianity: Finding Your Way Back to Jesus-Shaped Spirituality. 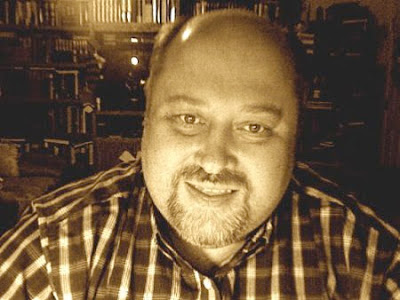 Michael Spencer- a pic I poached off IMonk


Michael loved Mark Heard's music and so do I. Heard died from a heart attack way back in 1992. So today Heard's "Nod Over Coffee" is a most appropriate Friday traditio. Heard had a great head of hair, by the way.


If we could see with wiser eyes
What is good and what is sad and what is true
Still it would not be enough
Could never be enough
at January 25, 2013