Baptism of the Lord

Vespers this evening brings the Christmas season to a close for this year, at least for Roman Catholics in the United States. The liturgical year takes us through the entire Paschal mystery. During these weeks of Christmas we have celebrated not only our Lord's Nativity, but the Feast of the Holy Family, which in Year C, the year we primarily read from St. Luke's Gospel on Sundays, features the pericopé of Jesus being found by Mary and Joseph in the Temple, the Solemnity of Mary the Mother of God, and the Epiphany. It is fitting, therefore, that this season ends with the beginning of Jesus' public manifestation, or epiphany, which takes the form of a theophany; the voice of the Father sounding from the heavens and the Holy Spirit descending on Him in the form of a dove.

The Theophany we hear about today is no mere affirmation of Jesus as the long awaited Jewish Messiah, or even as Lord, but as Son of God. It is important to note that in today's Gospel Jesus is not only baptized, but confirmed. He is confirmed, not by anointing with sacred chrism, but by the direct anointing of the Holy Spirit, who descended on Him at the same time the voice of the Father "confirms" Jesus' identity His Son. 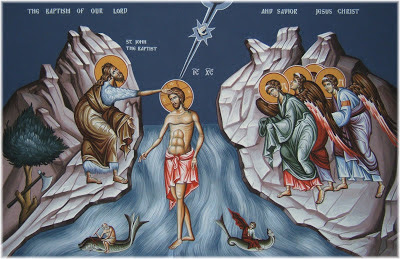 In baptism we are reborn as children of the Father, receiving adoption through Christ Jesus. In confirmation we are called by name, just as we are in baptism. Like Jesus, we are anointed, thus having our baptismal identity as God's children confirmed and sealed. Maybe a good motto for confirmation would be: "God seals the deal." Okay, probably not.

By virtue of our anointing in confirmation we are also made priests, prophets, and royalty. All of this is predicated on being the daughters and sons of the Father in Jesus Christ and by the power of the Holy Spirit.

This year there is only a month between the end of Christmas and the beginning of Lent. In tracing the arch of the Paschal mystery during this liturgical year, after Jesus' baptism by John in the Jordan, he enters the desert for forty days of fasting and prayer prior to embarking on his short, but intense and revolutionary public ministry.

On the twenty-fifth day of Christmas, our loving Father gives to us, one Savior, Lord, and Brother! Knowing Jesus is the greatest gift of all!
at January 13, 2013