This year St Patrick's Day, which falls during Lent every year, is on a Friday. Of course, on Fridays during the holy season of Lent, Roman Catholics are obliged to abstain from eating the meat of warm-blooded animals (there is no obligation to eat fish). Technically, this means that eating meat on a Friday of Lent is a sin, a confessable offense. At least in the United States, it is customary for many bishops, by no means all, to dispense their local churches from the obligation to abstain from eating meat and any other Lenten discipline one may be trying to observe, when St Patrick's Day falls on a Friday. Predictably, these dispensations do not sit well with some self-appointed guardians of orthodoxy.

But let's be Catholic: if you want to eat meat on St Patrick's Day when it falls on a Lenten Friday and your bishop dispenses you from the obligation to abstain from meat, then it's fine to eat meat. Do it and savor every bite. Contrary to the expressed views of some Catholics, to think yourself more Catholic than your bishop, or even someone else's bishop, is to fail to understand the essence of catholicity. To be Catholic does not mean adhering to a rigid set of static rules externally imposed and rigidly enforced.

It is this inadequate understanding of what it means to be Catholic that Pope Francis is challenging head-on and meeting with no little resistance. As Catholic author Daniel Schwindt recently noted on Facebook:

Note to interested Catholics: Since there's a bit of talk going around about Pope Francis and the possibility of schism, the following reminder might be timely. Canon 751 defines schism as “the refusal of submission to the Supreme Pontiff or of communion with the members of the Church subject to him."

Thus, one is not "in schism" due to a departure from Tradition or from doctrine. One is in schism only with reference to the pope. So, while it IS possible for a pope to cause a schism, it IS NOT possible for him to actually be "in schism" or to commit the crime of schism, since he cannot refuse submission to himself.

The possibility of a "heretic pope" is another matter, but one which, according to experts in canon law, is so remote a possibility that history presents no examples

Of course, if you live in a diocese where the bishop has granted a St Patrick's Day dispensation, you are by no means obligated to eat meat. You may choose to abstain. This point is key: your decision not to eat meat in no wise makes you more righteous, more holy, and certainly not more Catholic, than those who eat corned beef, a cheeseburger, a steak, some bacon, or, heaven forbid, a bacon cheeseburger with corned beef on top.

For anyone struggling with this, may I suggest meditating on Romans 14:13-23, which includes this passage: "For the kingdom of God is not a matter of eating and drinking, but of righteousness, peace and joy in the Holy Spirit" (Rom 14:17). As you reflect, don't play amateur exegete, which usually results in a not too masterful eisegesis (a reading into). In this passage, St Paul addresses abstaining from food and drink (likely meat sacrificed to idols) that someone new to the faith, or who has an immature faith, believes it is sinful to consume. He urges those who are more mature in their faith to refrain from consuming these in the presence of one whose faith is less mature so as not to give scandal and potentially endanger your brother's or sister's immature, but hopefully growing, faith. 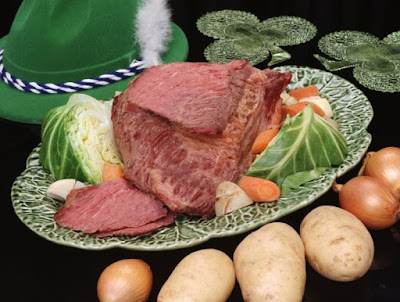 I think this passage is directly applicable to the St Patrick's Day dispensation controversy that pops up every year St Patrick's liturgical memorial occurs on a Friday. The principles Paul sets forth in this passage apply even though the apostle is urging abstaining and not consuming. I suppose if I were with someone on a St Patrick's Day that fell on a Friday of Lent, one for which we both had been granted a dispensation from Friday abstinence, who thought it sinful for me to indulge, I would refrain so as not to scandalize my friend in Christ who is not mature and maybe not too secure in his faith. It would be, on the whole, a small sacrifice. After all, I love fish n' chips.

Conversely, I think, according to the principle the apostle lays down, it works the other way too. If someone's bishop grants him a dispensation from Friday abstinence during Lent, it is very wrong, sinful in fact, for a person of mature faith to guilt him for making use of it. "For the sake of food, do not destroy the work of God. Everything is indeed clean, but it is wrong for anyone to become a stumbling block by eating" (Rom 14:20), or, by extension, not eating. While St Paul was certainly not enthusiastic about Christians participating in pagan rituals, he saw nothing inherently wrong with eating meat sacrificed to idols, albeit with the provisio that one should not eat such meat if it caused a brother to stumble. Hence, making use of a properly granted dispensation should cause nobody scandal. If someone chooses, for his/her own reasons, not to make use of the dispensation and so not indulge, that is fine too. Hopefully, the decision not to make use isn't one made for self-righteous reasons, or done as the result of mistaking means for ends.

During Lent, as well as outside of this holy season, majoring in the minors is antithetical to being a Christian disciple. It seems to me that those who style themselves "Trads" like to recklessly throw the word "heresy" about. Many who call themselves "Progs" (i.e., "Progressives") like to toss about the term "Pharisaical." It can in no wise be considered heretical for a bishop to dispense his local church from Friday abstinence during Lent to celebrate the festival of a saint. It seems to me that at root Jesus' main problem with the Pharisees who disputed with him was mistaking the prescriptions and proscriptions (i.e., the rules) of the Law for ends in themselves, as opposed to means to the end of becoming holy, which is to become like Christ, which is to love perfectly.

There are two solemnities that typically occur during Lent: St Joseph's Solemnity on 19 March, which, like St Patrick's Day, always falls during Lent, and the Solemnity of the Annunciation on 25 March (nine months before Christmas). When these solemnities fall on a Lenten Fridays, no dispensation is needed to eat meat. You may do so because a solemnity trumps, as it were, a Friday of Lent.

In light of all the above, The Smith's asking the question, "What Difference Does It Make?" strikes me as a very congruent, not to mention, very early, Friday traditio.


The devil will find work for idle hands to do
I stole and I lied, and why?
Because you asked me to!
But now you make me feel so ashamed
Because I've only got two hands
Well, I'm still fond of you


Speaking of bishops, later today I will be attending the installation Mass for our new bishop, the Most Reverend Oscar Solis, who will become the tenth bishop of the Diocese of Salt Lake City. Maybe I'll invite him for corned beef and cabbage a week from this Friday.
at March 07, 2017