"maybe they'd tell you what I would say"

Today is St. Patrick's Day. I always like to note that, in addition to being a deacon's son, Patrick was most likely a native Welsh speaker. As a young man he was captured and taken to Ireland as a slave. He escaped, became a priest, and went back to Ireland as a missionary. He is, without a doubt, a pan-Celtic saint. While St. Patrick's Day in the U.S. is a secular holiday largely consisting of the kind of excess that would make classic Celtic saints cringe, it is more of a religious observance in Ireland. 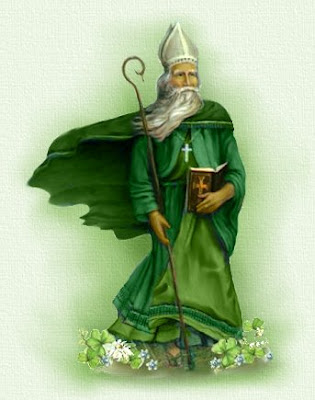 While I recognize it's probably a bit sanctimonious to say so, today I have been asking Venerable Matt Talbot to intercede for all who think and act as through the quintessence of being Irish, or any kind of Celt, is getting piss-pants drunk. If you drink, I have to say, no self-respecting Celt would drink something like Bud Light dyed green.

For what it's worth, today was a normal Lenten Friday for me, replete with abstinence, a good run, Stations of the Cross, the Sorrowful Mysteries of Our Lady's Rosary, soup and bread for supper with my parish. I did permit myself the indulgence of a Del Taco shrimp burrito for lunch. I also read Romano Guardini's short reflection on the first Sorrowful Mystery of the Blessed Virgin's Most Holy Rosary, which is Jesus' Prayer in the Garden. As I learned the Rosary, the spiritual fruit of this mystery is contrition for sin. It is a personal custom of some years now to pray the Act of Contrition after invoking each of the five Sorrowful Mysteries, just before the Our Father. What stuck with me from Guardini's reflection was this: "The hour of Gethsemane is inexhaustible. We must draw from it as much as our hearts can hold" (The Rosary of Our Lady 101).