A few notes on deacons

On 2 May 1968, shortly after Paul VI’s motu proprio [Sacrum diaconatus ordinem] paved the way for the establishment of the renewed diaconate, the bishops of the United States requested permission from the Holy See to establish the diaconate as a permanent order of ministry in this country. The justifications provided by the bishops for establishing the renewed diaconate in the U.S. were:


1. To complete the hierarchy of sacred orders and to enrich and strengthen the many and various diaconal ministries at work in the United States with the sacramental grace of the diaconate
2. To enlist a new group of devout and competent men in the active ministry of the Church
3. To aid in extending needed liturgical and charitable services to the faithful in both large urban and small rural communities
4. To provide an official and sacramental presence of the church in many areas of secular life, as well as in communities within large cities and sparsely settled regions where few or no priests are available
5. To provide an impetus and source for creative adaptations of diaconal ministries to the rapidly changing needs of our society 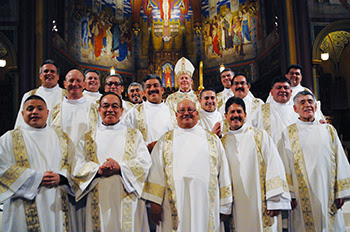 
A little more than a year later, on 30 August 1968, the Holy See’s apostolic delegate to the United States informed the bishops that Pope Paul VI had granted their request.

In the Diocese of Salt Lake City, it was Bishop Joseph Lennox Federal, our sixth bishop, who established the permanent diaconate. He did this on 28 September 1974. Then-Father (later Monsignor) John Hedderman was in charge of forming our first deacons. He went on to serve as one of the early presidents of the National Diaconate Directors Association. On 26 December 1976, the Feast of St. Stephen, one of the seven men set apart by the apostles to serve the Christian community, who was martyred for his preaching, Bishop Federal, who was present at all four sessions of the Second Vatican Council, ordained the first deacons for the Diocese of Salt Lake City. In 1977, Bishop Federal ordained seven more men to the permanent diaconate. So, for the past forty-plus years, the permanent diaconate has thrived in our local church.