Misery is the need for mercy

Lie/die; lying/dying. These may seem like random associations, but random they are not. Words that rhyme have at least that in common, which is a lot, especially when one thinks of that most effective means of human communication: poetry. In today's first reading we hear about what we have simply come to know as "the fall." We did we fall from? The succinct answer is grace. We fell from God's grace. You see, God made us to live in a state of grace, which is an old-fashioned and somewhat stilted way of pointing to the fact that we are made for communion: communion with God, communion with each other, and communion with the whole of creation.

Our deadly fall from grace was the result of believing a lie. When it comes to the account of the fall in Genesis, as well as to both creation accounts, taking it too literally drains the narrative of much of its revelatory meaning. What is easy to overlook is how true, how utterly brilliant, are these pre-historical narratives in telling us, not how things came to be, but why there is something rather than nothing. At the end of the day, as fascinating as discovery can be, how questions are not nearly as interesting as why questions. Investigating the how of things, which often fills the investigator with wonder and awe, seems almost always to lead to asking Why? The account of the fall in Genesis is an inspired way of telling us how the world, how our lives, came to be in the state they're in. Humanity's alienation from God because of sin is real, observable, and empirical.

Even if you don't believe in God it's likely you very often experience the world as a messed up place. In fact, the very real problem of evil, what philosophers and theologians call theodicy, is one of the main reasons many people lose faith in God. To see how messed up things are, however, you need to look no further than yourself, your own thoughts, words, and actions. Again, whether you believe in God or not, you are implicated in the messy state-of-the-world today. Hopefully, you are also implicated in efforts to overcome the world's messiness, as well as your own.

In the account of the fall, the serpent tells two lies. The woman recognizes and rejects the first lie, which is the question about God telling her she could not eat from any of the trees in the garden. The truth of matter is, she was free to eat from each and every tree in the garden, except "the tree of the knowledge of good and evil" God put in the middle of garden. The second lie was that eating from the tree of the knowledge of good and evil would make the woman (and the man) "like gods." Being like god, or being God, enables one decide for herself what is good and what is evil. It is a rejection of one's creaturliness, a denial of that fact she did not make herself. It was this second lie for which the woman fell and fell hard, as did the man subsequently, predictably falling for a far less subtle argument. Lest we be too hard her, it's the lie we fall for every time we sin too.

Sin is knowing that something is wrong, having some understanding as to why it is wrong, perhaps even believing that it is wrong in our more lucid moments, and yet choosing to do it anyway. This often takes the form of what we call rationalization, which simply means, in God-like fashion, granting yourself an exemption from the truth. In the words of St Paul from the first chapter of his Letter to the Romans- "They exchanged the truth of God for a lie and revered and worshiped the creature rather than the creator" (Rom 1:25). The lie for which the woman fell in Genesis is the same lie we believe over and over. As a result, we sometimes seem stuck in the swamp of our own making. 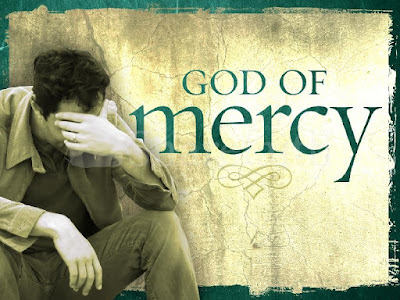 Far from being God's punishment, the result is what naturally follows not only believing, but living a lie. This is why today we can sing our Psalm response with great fervor: "Be merciful, O Lord, for we have sinned." Our Psalm this morning is Psalm 51, sometimes known by its old Latin name the Miserere, which comes from the Psalm's first words: "Have mercy on me..." To be miserable is to be a person in need of mercy. During Lent, in place of the Gloria, after the Confiteor or penitential litany, we sing, or say, Kyrie eleison, Christi eleison, Kyrie eleison, which is Greek for "Lord, have mercy, Christ, have mercy, Lord have mercy."

In our New Testament reading from St Paul's Letter to the Romans we receive hope. Sin and death do not have the last word, at least not if you don't want them to have it. In this passage, the apostle assures his readers that God has heard their cries for mercy and has taken pity on their misery: "And the gift is not like the result of the one who sinned. For after one sin there was the judgment that brought condemnation; but the gift, after many transgressions, brought acquittal" (Rom 5:16). A gift is free but judgment is the price you pay for living a lie. In short, sin is costly. Last year, during the Jubilee of Mercy, Pope Francis wrote a book: The Name of God is Mercy. If the name of God is Mercy, then Mercy is but another name for Jesus Christ, who is Divine Mercy.

In our Gospel today, the Lord resists and overcomes all the temptations, all the lies, for which frequently fall. He does for us what are not able or not willing to do for ourselves. The inspired author of the Letter to the Hebrews stated it thus:

Therefore, since we have a great high priest who has passed through the heavens, Jesus, the Son of God, let us hold fast to our confession. For we do not have a high priest who is unable to sympathize with our weaknesses, but one who has similarly been tested in every way, yet without sin. So let us confidently approach the throne of grace to receive mercy and to find grace for timely help (Heb 4:14-16)

Lent is a season of grace. It is the time for you to step back and take an account of your life. I think we can fruitfully conceive of Lent as a spiritual Spring cleaning. In Christ Jesus, God has been merciful to us because we have sinned. If we were to read just one verse more than what the Church has given us in our reading from the fifth chapter of St Paul's Letter to the Romans, we would encounter these words: "where sin increased, grace overflowed all the more" (Rom 5:20b).
at March 05, 2017