Then Jesus came from Galilee to John at the Jordan to be baptized by him. John tried to prevent him, saying, "I need to be baptized by you, and yet you are coming to me?" Jesus said to him in reply, "Allow it now, for thus it is fitting for us to fulfill all righteousness." Then he allowed him. After Jesus was baptized, he came up from the water and behold, the heavens were opened [for him], and he saw the Spirit of God descending like a dove [and] coming upon him. And a voice came from the heavens, saying, "This is my beloved Son, with whom I am well pleased" (Matt 3:13-17)

The Father declares His pleasure with His Son before Jesus begins His public ministry. Jesus is not accepted by the Father after He has done what the Father finds pleasing. The Father is eternally "well pleased" with His Son. The Father is pleased with the Son because the Son is. This is true paternity. Divine love is the pattern for all paternity.

In all four Gospel accounts of Jesus' encounter with John the Baptist, the Baptist recognizes Jesus as the One whose forerunner he is. In John's Gospel, the Baptist sees Jesus on two consecutive days. Upon seeing Him, John, the seal of the prophets, proclaims: "Behold, the Lamb of God" (John 1:29.36). 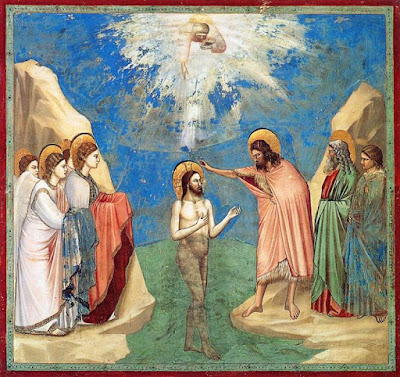 It is easy to miss that, in addition to being baptized, Jesus is also confirmed on the banks of the Jordan. What is confirmed, or made more certain? His identity as the only begotten Son of the Father. He is anointed directly by the Spirit. He does not need mediated signs and symbols, a prayer invoking the Spirit, or sacred chrism. He is the Anointed One, the Messiah. Hence, the theophany.

The Lord's Baptism makes explicit what, until now, is implicit. Even so, His identity as the Lamb of God, the only begotten Son of the Father, remains discernible only to those with eyes to see and ears to hear. Grasping that Jesus is the Lamb of God, points to the understanding that He is bound to become a sacrifice. It is not intuitively obvious to casual observers that Jesus is "the Father’s only Son, full of grace and truth" (John 1:14).

Just as Mary received what could easily be taken as a rebuke by her Son after she reproved Jesus for staying behind in the Temple when he was twelve years old (Luke 2:48-49), no doubt His departing from Nazareth to do His Father's will, which led Him to the Cross, was painful for His Mother to accept.

In addition to being the eternally begotten Son of the Father, Jesus is also the time-begotten Son of Mary. Just as in His divinity He is one in being, or consubstantial, with the Father, so in His humanity He is consubstantial with His Blessed Mother and, through her, with us. It is the mystery of Jesus' full divinity and full humanity that enables us to become children of God and, by extension, children of Mary, through rebirth in Baptism. At the risk of turning apologetic, this is why an orthodox understanding of who Jesus is remains so important for giving Baptism its ontological, as opposed to merely canonical, validity. Like Jesus, our Baptism makes what is implicit explicit. God made us and redeemed us for Himself because Deus caritas est ("God is love").

While His Baptism makes Jesus known publicly, it is not until He emerges from the wilderness, where He is led to be tempted of the devil, that His public ministry begins in earnest.

While this is longer than Guardini's "interpretations" of the mysteries of the Rosary, I reach nowhere near his depth. I am not surprised. Four more to go and so, to be continued...
at March 05, 2017