Tobit and the importance of burying the dead

Because my parish celebrated Mass in the evening instead of in the morning today, I was able to assist my pastor at the altar on this Memorial of St. Boniface, who was a fearless evangelist. Like my patron saint, Stephen, Boniface's fearless evangelizing led to his martyrdom. I did not have a chance to do more than glance at today's readings prior to Mass. When I heard it proclaimed, I was delighted by the first reading from the Book of Tobit, which is one of the deuterocanonical books, which are usually called "Apocryphal" by Protestant Christians.

Tobit is set in Nineveh, the capital of ancient Assyria, during the time when thousands of Israelites were exiled from Samaria to Assyria in the eighth century BC. Tobit was most likely written centuries later, in the late third or early second century BC. The Assyrian exile was the population exchange that led to the Samaritans having their unique, syncretistic from of Judaism, the center of which was Mount Gerazim, not Jerusalem.

I would give my bread to the hungry and clothing to the naked. If I saw one of my people who had died and been thrown behind the wall of Nineveh, I used to bury him (Tobit 1:17)

According to the Book of Tobit, when Sennacherib succeeded his father, Shalmaneser, as king of Assyria, he took to killing Israelites. After Sennacherib killed them, Tobit would bury his fellow Israelites. Eventually, this caused Tobit to flee Nineveh for his life, leaving his wife Anna and his son Tobiah behind. After he fled into exile, all of his property was seized by the state, leaving his wife and son with nothing. Forty days after he fled, Sennacherib was assassinated. His son, Esarhaddon, succeeded him.

King Esarhaddon put Tobit's relative Ahiqar, "in charge of all the credit accounts of his kingdom, and he took control over the entire administration" (Tobit 1:22). Ahiqar interceded with the king on Tobit's behalf. As a result, Esarhaddon allowed Tobit to return to Nineveh. During the Festival of Weeks, called by Greek-speaking Jews "Pentecost," Tobit, being a man of mercy, told his son Tobiah to

go out and bring in whatever poor person you find among our kindred exiled here in Nineveh who may be a sincere worshiper of God to share this meal with me. Indeed, son, I shall wait for you (Tobit 2:2) 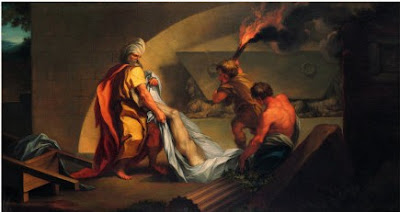 
As he went to find a poor person to invite to share their feast, Tobiah came across an Israelite who had been murdered and whose body was thrown into the marketplace. On hearing this, Tobit went and retrieved the body of his fellow Israelite, brought it to his house, put the body in a room so he could bury it after sundown, when no one would see him. Tobit's neighbors were aghast, saying,

Does he have no fear? Once before he was hunted, to be executed for this sort of deed, and he ran away; yet here he is again burying the dead! (Tobit 2:8)

Burying the dead in accord with their human dignity is important. It is one of the Corporal Works of Mercy.

I was struck by this reading because last week a man I have known for the past 10 years or so, John Ellichman, passed away. Prior to his conversion, John lived a dissolute life, which had brought him a lot of pain and sorrow. As a result, he was pretty much alone in the world. He would speak to his daughter in St. Louis once in awhile, but he had never really been part of her life. For several reasons, she is not traveling to Salt Lake for his burial. After his conversion, John was as faithful as anyone I know. He loved Jesus and, more importantly, knew he was loved by Jesus. John was without doubt one of the most humble, unassuming, unimposing people I have ever known.

John was nearly indigent. He was able to maintain a small apartment. He managed to pay his utilities as well as keep himself fed and clothed. Here is an example of John's faithfulness: after it was mentioned in a homily by a former rector of The Cathedral of the Madeleine that it was expensive to bury people and that the parish had, in recent months, paid for the burial of a number of people, John paid what he could for his own funeral and burial expenses.

John had heart problems the whole time I knew him. His doctors were amazed he was still alive. They were even more amazed that John walked everywhere. In all the years I knew him, John never owned a car and he didn't take the bus or the train. He walked everywhere, including to the 11:00 AM Mass at the Cathedral every Sunday, no matter the weather. He always wore a red bandana around his neck and a brown leather vest.

The only thing that is not paid for to decently bury John is his metal memorial plaque, which will serve as his headstone. Otherwise, his grave will be unmarked. The plaque will have John's name along with the dates of birth and death. The plaque costs $425.00. To ensure John a dignified burial I have started a GoFundMe campaign to raise the money for his memorial plaque. Apart from the fee charged by GoFundMe to use their service, there is ZERO overhead. If any money is raised over and above $425.00, I will donate it all to Mount Calvary Catholic Cemetery in Salt Lake City to use for others who, like John, need money to be decently buried.

This is an opportunity to do a Corporal Work of Mercy. No donation is too small. Twenty-five people giving $17 each would cover it. To donate click here.
at June 05, 2017