"Somewhere out there waiting is a place where I'll know peace"

Thanks to the charity of friends and one stranger, enough money has been raised to inter John Ellichman and not leave his mausoleum crypt unmarked. I will conduct his committal service later this morning at Mount Calvary Catholic Cemetery here in Salt Lake City. Burying the dead is an work of mercy.

Because we believe in the resurrection of the body, Christians treat the bodies of our dead with great reverence and respect. Treating the bodies of the departed, of course, is not a unique feature of Christianity. In fact, this is something we inherited from our elder brothers and sisters- the Jewish people. Respect for a person's human dignity, which includes reverencing each person's bodily integrity, does not end at death. Given the vulnerability and defenselessness of someone's dead body, we have an obligation to safeguard the body of the person who has died. 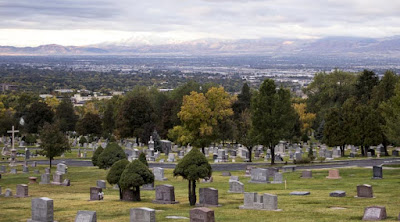 I am feeling pretty good that I am putting up a traditio on succeeding Fridays. Our traditio this week is a song I heard for the first time last night on 103.1 The Wave's Newer New Wave program, which airs on Thursdays at 7:00 PM. Since the advent of the program several months ago, I have been busy on Thursday evenings and unable to tune in. The show features both new releases by New Wave bands who have been around since the '80s and newer bands whose sound has the New Wave warp and woof. Without further delay, our traditio is VNV Nation's "If I Was."


"VNV" stands for "Victory Not Vengeance." It's a nation to which I can pledge allegiance.

Even with our observance of two major solemnities the next two Sundays (Trinity Sunday and Corpus Christi, respectively), we are back in Ordinary Time. So, it's time to get back to observing Fridays as days of penance in an intentional way. Momento mori - remembering death - is not morbid in the least.

Considering the brief span of one's mortal life ought to infuse one with meaning and purpose, causing us to spend time wisely. Scripture is incessant on this point. Sadly, what matters are not the things we tend to spend most of our time doing. May God have mercy on us all.
at June 09, 2017

Email ThisBlogThis!Share to TwitterShare to FacebookShare to Pinterest
Labels: Community of the Heart, Faith and morals, Penitential Fridays