"One simple thing is all we really need"

With a few exceptions, it has been very difficult to post a Friday traditio the past several months. Yesterday it happened again that I was busy from dawn to sunset. This is okay because life trumps blogging. For some reason, like the fact that I've heard this song on the radio several times this past week, Stabilizers singing "One Simple Thing" is our late traditio for the first week of June.

I am used to time seeming to speed up as I grow older, but at the pace 2017 seems to be going, I will 80 the day-after-tomorrow. It's easy to see that Einstein was correct without doing any math.

"One Simple Thing" is one of those wonderful 80s songs the meaning of which remains slightly ambiguous. It seems to be about love between two people who want to just be together, excluding everything else, by building a wall "no one else can see." There is a lot of talk these days about "safe spaces." Desiring a "safe space," despite the harsh words of some, is a very understandable reaction to reality. In the past, we used to call this place home. But with the advent and widespread availability of the internet and various kinds of social media, I don't think home feels as safe as it once did for most people. For many, home is not a place where you can keep the world at bay.

Love both is and is not a safe space, so to speak. It is not a safe space because loving another always requires you to take a risk. But once love, if it merits the name, is experienced, it becomes something with a reliable degree of certainty, making it it highly desirable in an uncertain world.

Erecting and then living behind an invisible wall with one's beloved is, it seems to me, if in perhaps an overly philosophized way, expressive of the desire to inhabit eternity within time. Love between two finite beings can't be anything other finite, despite the longing for eternity love brings forth from within us, exposing the need that constitutes us as human beings made in the divine image. Hence, eternity often remains elusive. The passage of time, as noted above, stops for nothing and nobody. As the pre-Socratic Greek philosopher Heraclitus noted: "No man ever steps in the same river twice, for it's not the same river and he's not the same man." These assertions are, of course, as subsequent philosophical discourse amply demonstrates, disputable. But the intuition that only love is eternal strikes me as beautiful and, hence, true. 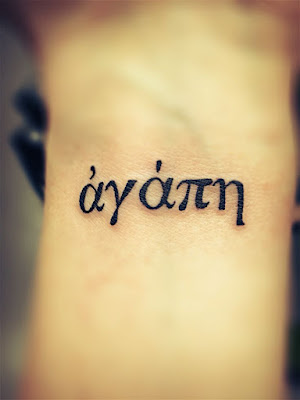 If the "one simple thing" is love, even if restricted to the love of two people for one another, it bears noting that few things are more complex than the love between two people. On the other hand, nothing is more simple than what God has revealed about God, namely "God is love" (1 John 4:8.16). Moreover, "In this is love: not that we have loved God, but that he loved us and sent his Son as expiation for our sins" (1 John 4:10). Being what it is (i.e., the very basis of reality), love does not build walls, or put up and maintain barriers, but removes them. The best evidence of this is creation and the Incarnation of the Son of God. Concisely, then, love is profuse, which means, according to the dictionary, "exuberantly plentiful; abundant." It is God, who is love, who enables us to inhabit eternity within time.

We would be wise to "give back all the things we had but one." In fact, in the end, that is what we'll be asked to do. Whether or not we can bring ourselves to do it will perhaps be the determining factor in how we live, or whether we, in fact, go on living. You see, to live is to love.

Sundown this evening marks the beginning of the Pentecost. After Easter, Pentecost is the most important observance of the liturgical year. Yes, it even trumps Christmas. Today I am privileged to accompany 6 adults from my parish, who I have been preparing to receive the Sacrament of Confirmation over the past few months, to The Cathedral of Madeleine to be confirmed by our bishop, Oscar Solis. I am excited. At least as I learned them, the spiritual fruit of the Third Mystery of the Most Holy Rosary of the Blessed Virgin Mary - the Descent of the Holy Spirit - is God's love for us. The Holy Spirit is Christ's resurrection presence in us, among us, and through us until he returns in glory.