A few barely coherent notes on a thing called "spirituality"

The Lord does not lead me to himself merely for my own sake, but for his sake and the sake of others.

The above thought came to me as I was silently preparing to serve at Mass this morning. I was tempted to write that it came to me unbidden, but I always bid the Lord to speak to me in some way. It is by no means the case that he always does so.

This May has not been the most prolific month in the not-so-illustrious history of Καθολικός διάκονος. In fact, I had the feeling throughout most of the month of being a faltering blogger. Blogging wasn't the only thing I felt faltering. I don't mind sharing that from about midway through Lent until early last week, my spiritual life was faltering. The reason for this is simple: my spiritual practice, or my practice of the spiritual disciplines, waned almost to the point of disappearing. This happened because I allowed myself to become way too busy (again) and, as a result, overly anxious. Over the past week or so, by the grace of God, I have begun again. To paraphrase Pater Tom (Merton), when it comes to the spiritual life, we are all always only beginners.

The spiritual task I think the Lord has given me for now is to be at peace with myself in his presence. This requires stillness and silence, two things I cherish, but that I have gotten away from practicing. Once lost, it requires effort to regain the ability to enter into silence through physical and mental stillness.

At least for me, the great battle of middle age stems from the realization that at 51, in all probability, more of my life lies behind me than before me. If not, then I will live to be at least 103. Closely related to this realization is coming to grips with my limitations, which is not to say I am incapable of learning new things or any self-improvement, but that there are certain things that are no longer possibilities for me. Apart from sometimes thinking that I've wasted most of life so far, this is liberating. Without a doubt, the biggest battle of all remains overcoming myself.

I am currently reading Thomas Nevin's The Last Years of Saint Thérèse: Doubt and Darkness, 1895-1897. It is a remarkable book. One that I would say is indispensable for any devoteé of the Little Flower. This book is indispensable because Thérèse Martin is often the victim of the silliest of sentimental reductions. I learned of Nevin's book by reading another book, one that I also highly recommend: Fr. Tomáš Halík's Patience with God: The Story of Zacchaeus Continuing in Us.

Let's face it, there is nothing more disheartening than self-serving and sentimental reductions of the Little Way of the Little Flower. Such reductions abound, written by well-meaning Christians who really have no grasp of the charism given to Thérèse Martin. Our Holy Mother, the Church, grasps the depth of the witness of St. Thérèse of Lisieux. Making the Little Flower a Doctor of the Church is proof of this. Thérèse is a saint for the twenty-first century, someone who was very far ahead of her time. "Bearing the Cross of Community" is the title of the third chapter of Nevin's book. In this chapter, Nevin gives the reader a glimpse of what Thérèse's "Little Way" looked like in practice. To the final section of the third chapter Nevin gave the title "Seeking Escape from Self." 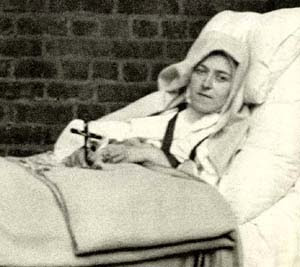 While, as Christians, we do not believe in or anticipate the annihilation of the self, but live in the hope of living forever as self-conscious resurrected beings with physical bodies, we do seek liberation from the self- not the body, which is the instrument we're given with which to love. Love of self is exhausting, consuming as it does one's spiritual, mental, and physical resources. Whether we know it or not, we long to be people for others; people whose entire being is consumed with love of God and neighbor; people who think of ourselves last, if at all. Forget the run-away bestseller from several years ago, The Secret, which sought to forward something called "the law of attraction," by means of which we draw to ourselves everything we want, meaning money, success, hot women and the like, the secret to happiness is grasping your need to be a person for others.

There are a few things from this short section of Nevin's sub-chapter that, I think, bear noting. In Nevin's own words, Thérèse told her sister Céline: "The more helpless one is... the more loving is God" (117). In her own words, Thérèse wrote: "He prefers to see you stumble in the night upon the stones of the way than to walk in the full light of day on an enameled path of flowers which might slow you down" (117). Writing again to Céline, Thérèse insisted: "Yes, it's one's sheer nothingness enough to humble oneself and sustain one's imperfections gently. There's the real sainthood!" (121) Writing to Pauline, who, like Céline, was Thérèse's natural sister and a Carmelite sister in the same cloistered community, who served for many years as Prioress of their convent, Sister Marie de la Trinité, just a few months before Thérèse's canonization, observed, referring to the Little Flower, whom she knew well: "What canonized saint has ever spoken like this: 'We others,' [Thérèse] told me, 'we're not saints who weep for their sins, we rejoice in them as they serve to glorify the Good Lord's compassion" (121). This passage from Marie de la Trinité's letter to Pauline prompted Nevin to observe:

If Thérèse did not reach the bathyspheric [there's your word to look up today] perceptions of sin that Dante records in his Commedia, she was well informed, by herself and by her sisters, both natural and spiritual, that a futile self-oriented longing, and ever turning of self into Self, moves diametrically against the truth that must always be directed to God. Self also moves against charity, which can only be directed to others (121-122)

Obsessing over one's faults and failings is self-love, a way of rejecting God's love, which is at work pulling us beyond ourselves.

Thérèse's "Little Way" is not only reduced, but is obliterated when it is made into a Pelagian path of perfection that presumes human perfectibility without the need of God. Very often, Nevin points out, Thérèse's "'way' has been construed as little daily acts by which one can work toward a cryptic sainthood" (120). "What has not been given sufficient emphasis," he continues, "is Thérèse's own model of a studied imperfection, an attention to daily inadequacies and failings" (120). "Her way of imperfection"- this is important - "marked the path of trustfulness she wished to give God. Without continuous imperfection and a continuous sense of it, trust could fall into presumption of one's sufficiency. Thérèse is not explicit but she hints at a creeping Arianism [not a transposing error on my part; Nevin uses "Arianism," but I am quite sure he means Pelagianism], the heresy of self-advancement, wherever a steady conviction of one's inadequacy and weakness may falter" (120).

In what Nevin describes as "the liveliest of her plays," Le Triomphe de l'Humilité, Thérèse puts the following words on the lips of Lucifer, words with which he seeks to instruct demons on how best to invade the convent: "suggest to them above all to be self-centered, for self-love is the weakness of every human being, it's even found in the cloistered communities, and I assure you, my friends, it's my most reliable weapon for slowing down he love of God in the hearts of all his nuns..." Given that she identifies self-love as "the weakness of every human being" it seems reasonable to extrapolate the last phrase to include all God's people.
at May 29, 2017

Email ThisBlogThis!Share to TwitterShare to FacebookShare to Pinterest
Labels: Community of the Heart, Prayer, Saints, Spirituality