I am very glad that I went to Mass first thing this Memorial Day. Beginning today by serving at the Lord's altar was the best beginning I could imagine. By participating in Mass we remember - call-to-mind-in-order-to-make-present - what is most important: the Father bringing about the reconciliation of the world through his Son, by the power of their Holy Spirit. In and through the Mass, God seeks to bring about peace, the communion, that he meant his good creation to be. It is only this reconciliation, which is God's work, that will bring about true and lasting peace. As our opening hymn, we sang "Let There Be Peace on Earth," composed by Jill Jackson Miller and Sy Miller in 1955. The song begins:

Using the readings of the day, we celebrated the Mass for the Preservation of Peace and Justice. While it would be a pitiable nation that did not remember those who died in its service, we must remain cognizant of the horribly destructive nature of war, not only on combatants, but on civilian populations and on the environment. Being not only Christians, but human beings with at least an ounce of humanity, we must consider the human, civilizational, and environmental devastation that warfare leaves in its wake. Lest we romanticize and sentimentalize warfare, which tempts us to view it as something of a positive good, it seems fitting to me that on Memorial Day we also remember before God all those innocent children, women, and men who have been killed, raped, maimed, and psychologically afflicted by the waging of war. In our current milieu, we also need to think about those who are forced to leave their homes, their cities, their countries, and their regions because of fighting. We have a word for these dispossessed and displaced people: refugees.

As you can see, for me, Memorial Day is a solemn day. I make no apologies for this. 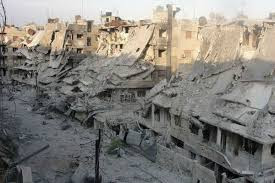 Today's first reading from Acts is yet another vignette about baptism in the Holy Spirit, one that points us, again, to the necessity of the Sacrament of Confirmation. This is not wholly a digression from the main theme of peace. After all, one of the Twelve Fruits of the Spirit is Peace. Peace is not passive. It is not just the absence of conflict. Being a peacemaker, which is one of the Beatitudes, is an active endeavor, one that is to be practiced in the midst of conflict. There may be nothing in this world that requires more fortitude (i.e., courage), which is one of the Seven Gifts of the Spirit, than being a peacemaker.

In today's Gospel, the disciples tell Jesus, after hearing what he tells them in the preceding four verses, which culminates in these words: "I came from the Father and have come into the world. Now I am leaving the world and going back to the Father" (John 16:28), that now they "get it," the light has come on. They tell Jesus that now they understand clearly who he is, why he came, and where he is going. Their answer seems to carry with it the implication that, as a result of their "getting it," they will act accordingly. With his initial response - "Do you believe now?" - Jesus clearly chides them before letting them know that do not, in fact, "get it." The good news is their "getting it" is not what matters most.

When push-comes-to-shove, Jesus tells his newly confident followers, they will run away and abandon him. Despite their abandonment, he will not be left alone. He is never alone because the Father is with him always. The Lord goes on to say that he will not be left alone as a result of their running away from him and because of this they "might have peace in me" (John 16:32). In other words, their catastrophic failure to stand with Jesus will not rob them of peace. Jesus gives them peace by giving them himself, by their being "in" him, or, conversely, he being "in" them. The courage to which Jesus summons them is not courage in themselves, or courage that results from their own noble intentions and resulting brave actions, but the courage that comes from knowing Jesus has conquered the world, including their self-deception, duplicity, and myopia-induced cowardice.

Just as the Father is always with and "in" his only begotten Son, Jesus, the Son, desires to always be with his disciples that we might remain "in" him. He remains not just with us, but in us, by means of his Holy Spirit, who empowers us not only to do what Jesus did, but to enable us to do even greater things (John 14:2). The courage to be peacemakers in the midst of a world that is characterized by conflict, a world in which we will have trouble, a lot of which comes our way precisely for trying make peace, is not the least of these greater things.
at May 29, 2017